You don’t need to be the biggest tech fan to know that the brands which are currently leading the smartphone sales top, when it comes to sold units, are Apple and Samsung. For a long period of time, the South Korean manufacturer seemed to be dominating the tops, which was pretty normal, considering that they’re releasing at least a new smartphone every month. With such a big portfolio, it’s pretty hard for your competitors to keep up, right?

Samsung, watch out for that crown!

Still, with all of their smartphones weren’t able to keep up with Apple’s latest ones, the iPhone 6 and the iPhone 6 Plus. The Cupertino-based manufacturer’s latest additions broke the records and according to GSM Arena, citing StrategyAnalytics.com, the last quarter of 2014 found the two brands with the same number of sold units: 74.5 million. 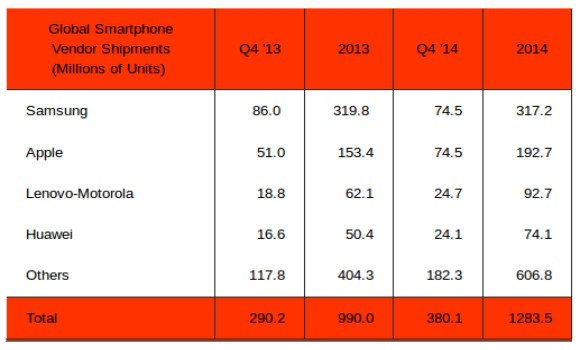 As you can see, the other brands don’t matter that much when it comes to smartphone sales. Also, Apple registered a huge boost, compared with the same period of 2013, when they sold just 51 million units. Well, the iPhone 6 is an amazing device, so this isn’t such a big surprise.

On the other side, Samsung had to deal with a decline, selling with 11.5 million less smartphones than in Q4 2013, but this didn’t changed anything in the top, as they’re still holding 24.7% of the market, while Apple is at 15.0% right now.

Of course, now we’re very curious to see how the smartphone sales top for 2015 will look, considering Samsung’s downfall. The latest rumors were pointing to them planning to acquire BlackBerry, which might help them consolidate their position, but Apple is getting stronger and stronger.

Also, we mustn’t neglect names like Huawei or Xiaomi, the later registering a huge growth in 2014. One thing is clear though: the competitive pressure is growing and it will make the smartphone race very interesting this year.