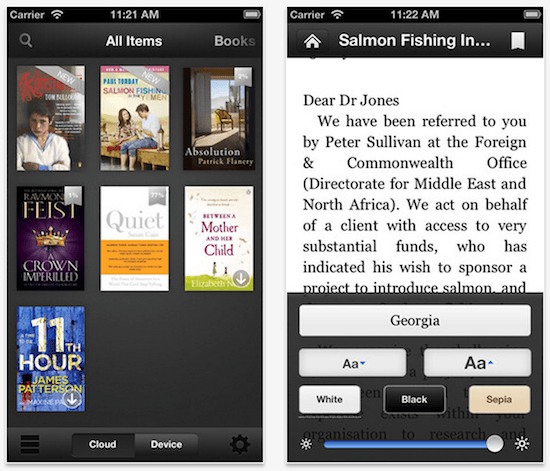 There is another feature included in this major update to Amazon Kindle for iOS application, X-Ray – a new feature that allow users to easily browse through the structure of any book on Kindle iOS Application. Well, all I can say is that Amazon wasted lot of time in picking up this already baked feature in their application. But still, it is good to see such integration of iOS core features into third-party applications.

-Accessibility features make it easier for blind and visually impaired customers to navigate their Kindle libraries, read & interact with books, and more. Enable VoiceOver in your device settings to begin.
-Easily rate and review books by accessing ‘Before you go…’ directly from The ‘Go to’ menu
-Enhancements to ‘Before you go…’ including the ability to download a free sample and email yourself a reminder about -recommended books.
-Additional Font Selection for Japan – Hiragino Mincho ProN (Serif)
-Bug Fixes/Stability improvements

The latest Kindle for iOS application is available in the App Store to download, and you can enable the VoiceOver feature by heading towards in Settings.app on your iOS device.