StatusModifier is yet another new Cydia tweak available in ModMyi repository for iPhone and iPad devices. StatusModifier tweak brings real-time RAM memory usage information in the status bar of iOS 7 running devices. If you remember the same feature first debuted by popular Cydia tweak, SBSettings on jailbroken devices. It works similar to SBSettings module and brings the RAM memory usage information on screen with few taps on the screen. 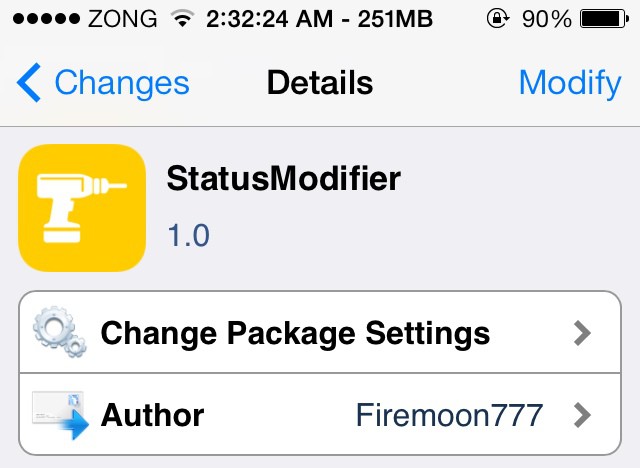 The jailbreak tweak is available for all iOS 7 running devices and does not require a penny. The usage of this tweak is pretty simple. StatusModifier allows you keep an eye on the current usage of RAM memory of your device. In the past, we shared that how monitoring the usage of RAM memory can supercharge your iOS experience with an iPhone or iPad.

StatusModifier is available for free of cost in Cydia Store. It does not come up with any advanced settings or options to customize. All you need is to install the tweak from Cydia, and respring your device to immediately active it.

Without any doubts, Apple has killed numerous jailbreak tweaks with new features of iOS 7. SBSettings becomes one of the victims of Apple after the launch of iOS 7 in public as Apple decided to provide some quick shortcut buttons in iOS with Control Center. But still, if you are missing some of the old perks then you can check out this tweak to get the real action on your iOS 7 jailbroken iOS device.