You are here: GeekSays Technology News » Apple » iOS 8 will be an app killer – Find out why

So iOS 8 is coming next fall. That’s great news. We are all excited to the extent that we are looking nervously at Apple’s website every few hours to check. However, the huge WWDC event brought unpleasant news to different iOS applications.

It’s very possible that SnapChat founder, Evan Spiegel, is thinking about a new way to face the possible loss in users when Apple releases the eighth version of its operation system, iOS. Let’s find out why. 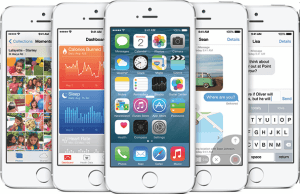 iOS 8 will bring numerous features to iMessage, an Apple-integrated messaging app. One of these features is the ability to send voice and video messages, including your location. Sounds familiar? Yes! This feature is completely “borrowed” from WhatsApp. The number 1 messaging application founder, Jan Koum, was pretty devastated by this. He mentioned on his official Twitter account that it’s “very flattering to see Apple ‘borrow’ numerous WhatsApp features into iMessage.”. I KNOW RIGHT?

Snapchat is another messaging app, which is pretty similar to different application on iOS and Android, but what is so special about it?

Well, iOS 8 is coming for snapchat.

During WWDC, Apple announced that it will include self-destructing feature that will delete your message “entirely” after being viewed by the receiver. It’s a cool feature, but it’s unfair to borrow it from Snapchat, at least according to Snapchat founders.

I’m pretty sure that all of us have used Dropbox and/or Google Drive to save his files on the cloud. You had to go to Dropbox/Google Drive, make a new account and upload your files there. You also have the ability to expand your storage space through purchasing more GBs, which is cool.

But if you’re an Apple user, you’re not going to install these applications on your mobile anymore.

Apple announced that it will make its iCloud service more integrated and connected within your devices. So, for example, if you took a picture with your iPhone, it’s going to be saved on iCloud and you can access it easily on your Macbook and iPad as well. You won’t need Dropbox or Google Drive anymore to save your files.

This is sad, right? But at least not for us. This will make other third party apps work hard to present other features and creative solution to cope up with iOS 8 sudden update, which will give us more options and interesting stories to share. Yay!