You are here: GeekSays Technology News » General » IBM Watson Powered Olli is Bringing A Change to The Automotive Industry

Local Motors has launched a new 12 seater bus that has some superb features, while the most outstanding one is that it is powered by IBM Watson making it a self-driving bus electric bus, the other thing that makes this bus stand out is the fact that its parts are 3D printed. For those who are environmentally inclined, this cool bus is also partially recyclable.

Once the parts of the bus are 3D printed at a micro-factory for around 10 hours the builders can then assemble the parts together to produce the final product which takes just about an hour. 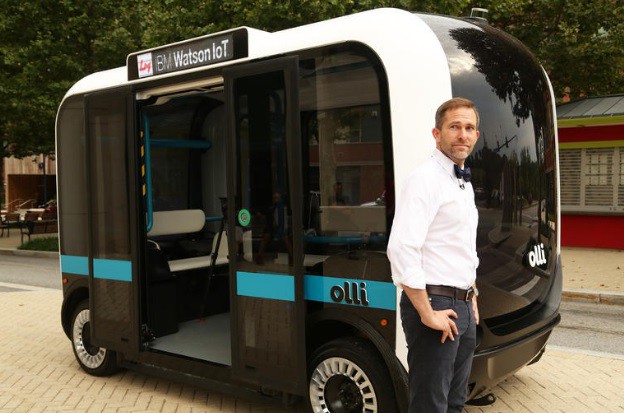 The design for this bus was submitted by Edgar Sarmiento who is a student of car design. Sarmiento explains that the bus has been designed as a public solution for the cities, and he wanted to keep the design simple and minimalistic.

The bus is powered by IBM Watson’s Internet of Things platform for Automotive. This makes Olli the first EV that features cloud based computing capabilities. With the manufacturing process being simpler than others and the software being intelligent, we have the perfect combination that we needed. John B. Rogers, Jr., CEO and co-founder, Local Motors says, “Olli offers a smart, safe and sustainable transportation solution that is long overdue”.

Once the bus begins operating in full swing, then an app will be launched which passengers can use to summon the bus. This app is meant to be somewhat like Uber. The bus will go around Washington D.C. on trial runs, but it will also be visiting the streets of Miami and Las Vegas. Plans are also in place to take the bus to Berlin, Germany.

Olli was unveiled in National Harbor when Local Motors’ new facility was opened in Maryland. More micro-factories are expected to open in the region to support the manufacturing needs of the bus. If Olli’s trial runs are successful, we can expect a radical change in the perspective of the automotive industry in the next few years.