You are here: GeekSays Technology News » General » How To Install Cydia Substrate On Android (Tutorial)

Over the years, Mobile Substrate on iOS has done lot of work. Mobile Substrate made its way to iOS via Cydia, from the creator of Jailbreaking community, Saurik. Today, we are once again here to announce something big for Mobile Substrate, but sadly it has nothing to do with iOS and iPhone users. Cydia creator, Saurik, has released the Mobile Substrate version for Android users. Substrate for Android is already available in Google Play Store, and users need to root their device before getting it running on your device.

Substrate for Android is a really big news for the Android Rooting Community, because it allow users to install anything on their Android devices. It allows your favorite jailbreak tweaks, and applications to also reach Android OS platform. WinterBoard from Saurik is already available on Android Substrate. WinterBoard on Android Cydia Substrate also allow users to customize their Android OS look with help of  WinterBoard functionality.

How To Install Cydia Substrate On Android Phone:

Step 1: In this step, you have to root your device according to your running OS. Because Cydia Substrate require Superuser access to make changes on your device. 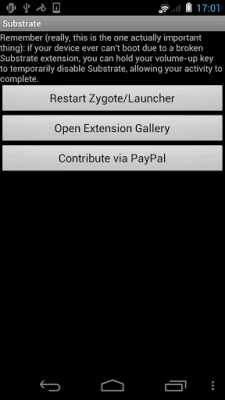