Less than a week ago, Google fulfills its promise of releasing the Google Now for iOS. Google released the Android only feature to iOS devices in their Google Search iOS application, as a combined feature to boost their search engine from iOS devices. However, it appears that the application didn’t win the user’s heart, and that’s not because of the service side issue. Google Now landed on iOS platform with such demands that becomes tough for iOS users to provide to the application.

In the first 12 hours, we received numerous reports from users that their devices are now draining battery. Google Now forced application to enable certain things on iOS that cause battery drain issues in the past. However, if you are facing the battery draining issue on your device, and still want to use Google Now on your iPhone / iPad. Here we have got a little trick for those who don’t want to delete the application from their devices.

How To Fix Google Now for iOS Battery Drain Issue:

Before going into the details, let me shed some light on the cause of battery drain. Google Now comes up with a variety of cards in the application that features certain information about you, and your local location. One can use it to measure the distance between his home, and office easily. It comes up with handy features, but these features seem to be not in favor of iPhone users.

Google Now enabled GPS on iOS devices, and forced application to access the GPS data even user is not using the application. The all-time GPS enabled featuring caused a massive battery drain for masses in the first impression. Many have reported that their battery ran out in just six hours after the complete installation. 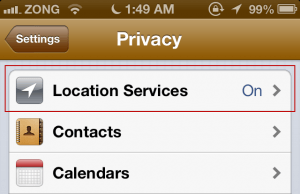 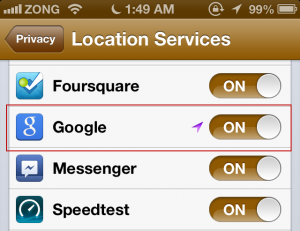 Note: It will disturb, number of Google Search location based features – but it will improve the overall performance of the application.