While reporting the serious updates on iPad Mini 2 launch, and Budget iPhone launch. You may found this less worthy to report, but it is still important for us to make our opinion on Google’s move in the iOS. Google has just rolled out a new update to Gmail for iOS application, which bring numerous improvements, and bug fixes along with an interesting feature that allow the application to work without relying on Apple iOS ecosystem on iPhone and iPad devices. 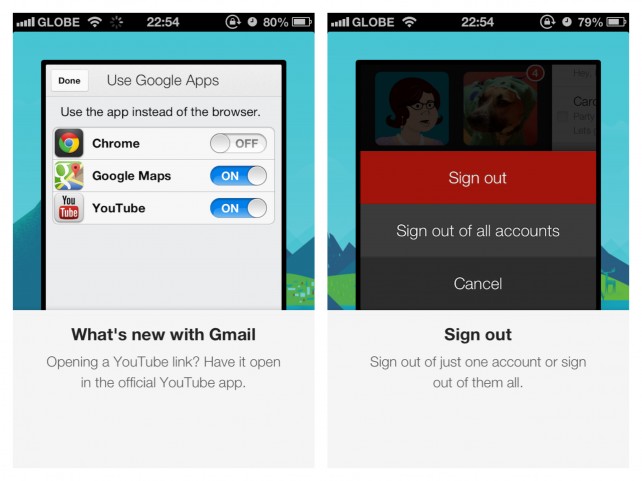 The latest Google application update on Gmail for iOS brings the feature that allows the user to open links in related applications, means if you have received a YouTube link in your email. It will allow you to directly open that link in YouTube for iOS application – if installed, furthermore it allow users to open new webpages directly on Chrome than Safari. Gmail for iOS limits the user to Google oriented applications on the iOS, but in case if you don’t have other Google provided application in your device, then it will revert back to normal system of iOS ecosystem.

However, the feature sounds cool to many, but if you are one of those who don’t want to play only with Google provided games, then there are options too that allow you to disable this feature right in your Gmail for iOS application. In addition to this feature, Gmail for iOS also lets you sign out from the current session on your device, it allows users to easily access the session of current account on all applications running on the same device.

The latest application update of Gmail for iOS carries some good features for the iOS users, and allows them more freedom to handle their things. The sign out from all accounts is a nice feature tough, and let the people to easily kill all their sessions opened on a specific device.