Let’s face it, BlackBerry has been through better periods than now. Their devices are not selling as they used to, while the operating system is far from being what users are looking for. Some time ago, tech fans and not only were talking even about the possibility of the Canadian company retiring from the game.

Still, they won’t quit that easy… A few months ago, rumors about an upcoming handset, codenamed ‘Windemere’, started spreading, and now, the company confirmed not just one, but two new phones which will join their portfolio: BlackBerry Classic and BlackBerry Passport.

Ok, BlackBerry, show us what you can still do!

While the Classic is just a throwback at the past, when the company’s QWERTY phones were selling like crazy, the BlackBerry Passport is the most interesting one. Or should we call it weird instead of interesting? Take a look at a first shot with the company’s CEO, Mr. John Chen and the phone and we’ll let you decide that… 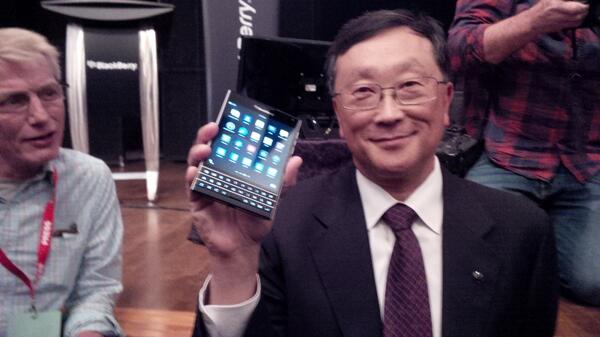 It’s pretty obvious where the names come from, right? If not, take a look at your documents and you’ll see.

It comes with a 4.5″ display and a resolution of 1440 x 1440, pretty atypical, compared to today’s smartphones. Right below, you can see a QWERTY keyboard, wider than most of the keyboards we’ve seen on previous BBs.

Personally, I can’t seem to figure out what market segment is BlackBerry pointing at with this device, but I’m really curious to see how it’s going to be received by the public.

Other details weren’t given yet, but the phone is expect to be officially unveiled in September, so stay tuned on our blog, as we’ll definitely keep you up to date with this subject.

What do you think? Will this be the device that will finally bring the company back on the smartphone main stage?