You are here: GeekSays Technology News » Android » Xiaomi to reveal the first phone for the West on January 15?

2014 was a great year for the Chinese manufacturer Xiaomi, as they handsets, a combination between top specs and an accessible price, sold like crazy. 61 million units, to be more specific. Unfortunately, they were available only in China, despite the big number of potential clients from Europe or the U.S., who were constantly expressing their desire to get their hands on a Mi4, for example.

The slimmest smartphone in the world?

Their wish might become reality later this month, as Xiaomi is planning to launch a new smartphone, supposedly the Mi5 model, on January 15, when a press conference is scheduled, according to Gizmo China. 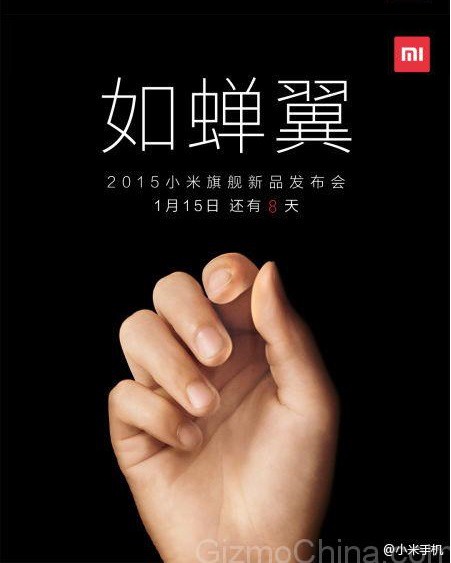 No details about the specs are available for the moment, but a teaser poster has been made public, revealing the fact that the new Xiaomi Mi5, if it’s going to be called like that, will focus on slimness. Presuming that the phone will fit between the thumb and the index finger from the poster, we might deal with a device that will be launched as “the world’s slimmest phone”.

No, there’s a problem with this ultra-thin phones. As much as we love their design, manufacturers often sacrifice specs, especially the battery. Still, we like to believe that the upcoming Xiaomi, as slim as it seems it will be, will have a power pack that will last at least a day.

Of course, there’s a set of leaked specs too, mentioning a Snapdragon 810 chipset, with a quad-core CPU, 3 GB of RAM, a…wait for it…4K 5.7″ display and a 20.7 MP rear-mounted camera, while the price should be somewhere around $320, like Xiaomi used us.

Any first thoughts about this device which seems to be pretty amazing? Would you buy a Xiaomi if it were available in other regions too?