Chinese manufacturer Xiaomi is getting ready for a big event, scheduled for the upcoming week. Over the weekend, the invites were sent, revealing that a new global Mi phone will make its debut in India, on April 23.

iCan’t wait to see what this is all about!

According to GSM Arena, a set of images were posted on the company’s social media profiles, mocking Apple, in some way or another, as they featured the “i DISAGREES” tag line. 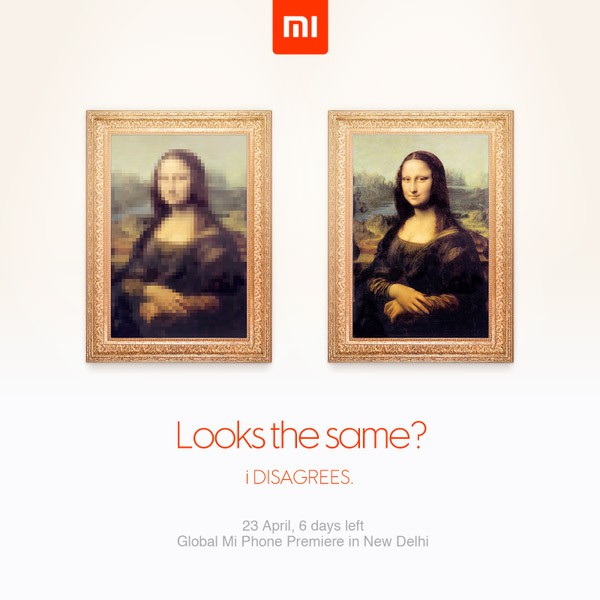 The first teaser Xiaomi posted presented two Mona Lisa paintings, one of them being very pixelated. Logically, this is a hint that the new Mi phone will have a QHD resolution.

The next image suggests that the handset will feature a compact body, but the battery life won’t be sacrificed. It is well known that nowadays, a lot of manufacturers are building very slim phones, but the battery has, in most cases, a reduced capacity.

Finally, the third image is pointing at a premium build quality, which, by today’s standards, automatically means a metallic chassis. Of course, we don’t exclude the possibility of seeing even more unusual materials, like a glass back panel or even something more exclusive, like carbon fiber or kevlar.

Will it be a Redmi?

There were a lot of rumors pointing to the Xiaomi Redmi Note 2 as the phone which will be announced. Still, we wouldn’t be so sure about the handset being a member of the Redmi line.

Fortunately, there are just a few days left until the big event will happen, so keep an eye on our blog, as we will be back with an update, as soon as it will be consumed.

What do you expect to see from Xiaomi on April 23?