You are here: GeekSays Technology News » Android » Xiaomi Mi Note, China’s rival for the iPhone 6 Plus

After a long teasing campaign, it finally happened. Today, the Xiaomi Mi Note, the Chinese manufacturer’s flagship, was launched and at a first look, we must admit that we’re impressed by this new phablet as it has a lot to offer.

But does have what it takes?

Presented as an alternative to the iPhone 6 Plus, the Xiaomi Mi Note actually has the same size as Apple’s smartphone, but it comes with a bigger display, measuring 5.7 inches, and smaller bezels. Also, it measures 6.95 mm in thickness, so this metallic phablet isn’t looking bad at all. 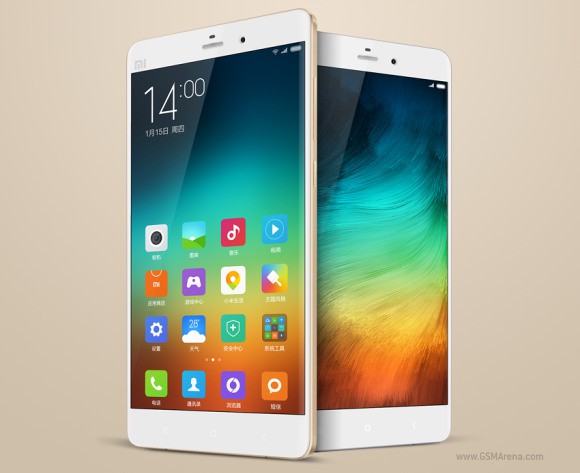 As stated by Android Headlines, it comes in two variants, Note and Note Pro, with some pretty notable differences. The “weaker” version, if we can call it like that, Xiaomi Mi Note, has a 1080p display and it’s powered by a Snapdrahon 801 chipset, aided by 3 GB of RAM and sporting a storage capacity of 16 or 64 gigs.

Oh my, now those are some specs…

On the other side, the Pro version takes everything one step further, as it’s loaded with the new Snapdragon 810 and 4 GB of RAM, but it’s only available in a 64 GB variant.

Both phablets are equipped with the same 13 MP camera on the back, with LED flash and optical image stabilization, while on the front, there’s a 4 MP snapper.

The Xiaomi Mi Note line is running the manufacturer’s custom ROM, called MIUI 6, based on Android 4.4.4 KitKat, while a 3,000 mAh battery powers the while thing. But isn’t this a bit to small for a 5.7″ phone?

As for the price, they start from $370 for the 16 GB model, while the Xiaomi Mi Note Pro 64 GB reaches $450. Unfortunately, they will be available just in China, but who knows what plans do these guys have for the future.

Would you buy this phablet over an iPhone 6 Plus?