You are here: GeekSays Technology News » Android » Xiaomi Mi 5 could make its debut next week

After Google’s Nexus event from September 29, most tech fans thought that they’ve seen all the important phones of 2015, but they’re a bit wrong, as one Chinese manufacturer is preparing to introduce something new in a few days. We’re talking about the Xiaomi Mi 5, the world’s fifth-largest phone maker’s flagship.

It’s time for a change in Xiaomi’s line-up!

According to Phone Arena, it’s been more than a year since the previous model, Mi 4, was released, so it’s time for a refresh. In order to sustain this (or just to tease the public), Xiaomi posted an invitation for a special event, scheduled for October 19. 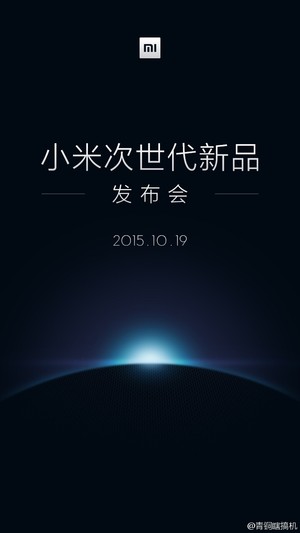 On the other side, the same source mentions that this event will bring just a mid-range model, powered by MediaTek’s new  Helio X20 chipset. As for the Xiaomi Mi 5, it’s expected to make its debut next year, stacking a Snapdragon 820 under the hood,  when the chipset will enter mass production.

Of course, the X20 is far from being your average chip, so a Xiaomi Mi 5 using it wouldn’t be a bad phone after all, since we’re  talking about a deca-core chip, with an impressive amount of processing power.

As fir the rest of the specs, the handset could also features 4 GB of RAM, a 16 MP camera and the new Qualcomm 3D Ultrasonic  fingerprint scanner.

Design-wise, the rumors are pointing to a display measuring between 5 and 5.3 inches, while the phone will be built using a  metallic chassis, therefore sporting a premium look.

Maintaining the competitive price is a big plus

Finally, the Xiaomi Mi 5 should have a price tag of around $315, which, considering all its offerings and looks, would make it an  excellent deal. But then again, our recommendation is to take this with a pinch of salt, since there’s no official confirmation  about this.

Keep an eye on our blog, as we will be back with more details, as soon as they’re available.