Lately, everybody seems to be very interested in what Chinese manufacturer is doing, since they’re on the way of becoming one of the biggest brands in the world when it comes to smartphones. After their Mi models sold like crazy and they announced that they will expand their online Mi Stores in the U.S. and Europe, it seems that they’re also working at a new phone, currently known as Xiaomi Ferrari.

A Ferrari, but with less horsepower under the hood

Of course, this is just a codename, as there aren’t any details about an eventual partnership between the Italian car manufacturer and Xiaomi, but that doesn’t mean we don’t want to know more about the handset. 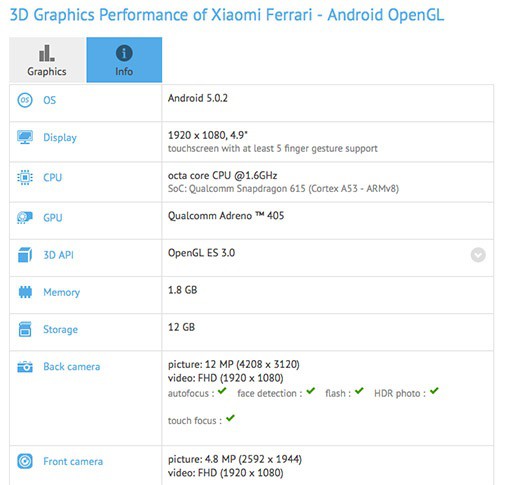 Even though the codename is automatically associated with power, the Xiaomi Ferrari could be just a mid-range handset, as revealed by a listing from GFXBench.

It will be a big phone, as the listing confirms a 4.9″ display, with a full HD resolution of 1920 x 1080 pixels, but unfortunately, under the hood we’re going to find just a Snapdragon 615 chipset, with an octa-core configuration, clocked at 1.6 GHz.

According to the same benchmark, the chipset will come with the Adreno 405 GPU and 2 GB of RAM. On the back, the Xiaomi Ferrari will have a 12 MP camera, with autofocus  and LED flash, able to shoot full HD videos, while the front snapper will feature a 5 MP sensor.

Last but not least, the phone will run the custom-made MIUI ROM, based on Android 5.0.2.

Could this one be the beginning of a new chapter for Xiaomi?

Nothing about a launch date or a price for the moment, but these details should be available soon enough. We believe that this so-called Xiaomi Ferrari could end up as a member of the Redmi line-up, even though the Redmi 2 was announced two months ago. On the other side, it could be the first model from a new line-up, but let’s play the waiting game and see what these guys are up to with this new phone.