For people that have an undying passion for electronics and everything they’re capable of, the WWDC 2014 is sure to delight the many hardcore electronic aficionados around the world that come to the conference every year. In this article, we’re going to be covering the new technologies getting ready for official release, and a little bit more for those interested. So let’s get right to what Apple is covering at the event itself.

It’s the talk of the town at the WWDC 2014, that’s for sure. Mac owners have been waiting for a new addition to the OS X line of operating systems for awhile now, and within three months, it will be officially released and on store shelves ready for purchase. OS X 10.10 Yosemite comes with a whole slew of new features and performance enhancements, including slicker icons, a more robust interface, and a lot of tweaks that make using the Yosemite operating system a lot easier than previous Mac OS editions.

Public beta testing of Yosemite will be ready VERY soon, so be on the lookout for the official announcement from Apple. The public beta test is limited to the first 1 million signups on a first-come-first-serve basis. And, as a matter of fact, we should all feel fortunate that after 14 years of not participating in public betas, Apple has now come back to offer public beta testing once again.

While we’re going to have to wait a little while for the public beta of Mac OS X 10.10 Yosemite, the Apple iPhone iOS 8 is already available for developer testing. Developers can download it right this second from Apple. The iOS 8 official release was covered in the WWDC 2014 keynote speech, and is being hailed as a genuine milestone for Apple in terms of overall operating system performance and improvements.

As Apple continues to unveil new technologies at their developers conference, things just keep getting more and more exciting. 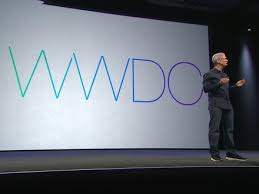 What is Swift? Swift has been designed from the ground up to be friendly to new programmers. But what does it do? Swift allows programmers to build apps that will run on the iOS operating system. Not only does this new programming language encourage hungry programmers to do their best work, but it will also improve the overall quality of iOS apps and hopefully make them more interactive.

A 500 page manual covering Swift was announced to be officially available for free download at the developers conference.

The WWDC keynote speech is available to be viewed at the official Apple YouTube channel. It was just released to the public, so be sure to get over there and check it out! Also noted at the conference are some new tools for developers that will completely revolutionize the way apps work within the OS.