The iOS 7 Jailbreak is already out in the market from some time, and many you have already installed several Cydia Tweaks on your devices to customize iOS 7 interface. However, there is no customization without real theme changing, and I know that everyone stopped earlier due to the compatibility issue of Winterboard with iOS 7 running devices. Earlier this morning, we learned Saurik finally rolled an update to its Winterboard for iOS 7. 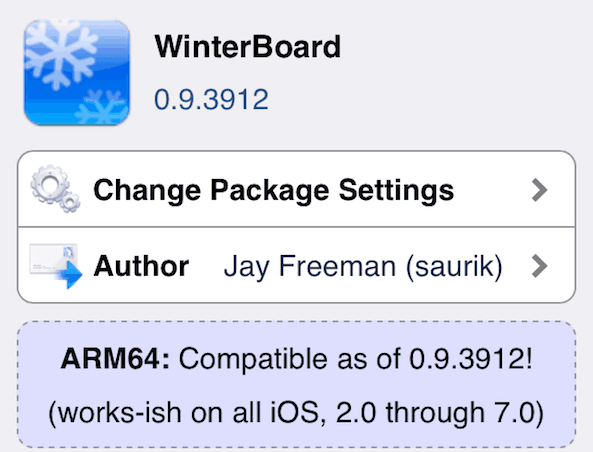 Yes, the Winterboard for iOS 7 is now available in Cydia Store and you guys can download it right on your devices. The new Winterboard for iOS 7 now supports every latest iOS 7+ running device, which means iPhone 5s, iPad Air and Retina iPad mini users can also modify their devices at premium level.

Winterboard for iOS 7 update was long due, and everyone was waiting for it to come out in the public. In easy words, it means now you can easily get rid of iOS 7 interface (if you don’t like it). Winterboard was not compatible with iOS 7 running devices at first days, but now everything is on the perfect track.

Winterboard for iOS 7 – Must Read:

It is merit mentioning here that newer device owners may have to wait further, because many themes and customizations are still not updated for your devices. Winterboard is just a platform that allow themers to customize your devices. Just give few hours to everything, and you guys will start receiving many updates about Cydia Themes updates.

As noted by my friends at iDB, the new update is still not very compatible with ARM64 running devices but can work for you in most of the cases. If you ever meet any error or mistakenly install any wrong theme that stuck your device in the boot loop, you can always disable Cydia Substrate to enter in safe mood and then delete theme files manually.