You are here: GeekSays Technology News » Apple » Why Apple Pay isn’t accepted by all retailers

As you may already know, not long ago, Apple announced Apple Pay, a great payment platform that can have an important role when it comes down to paying for products and services both online, but also offline. 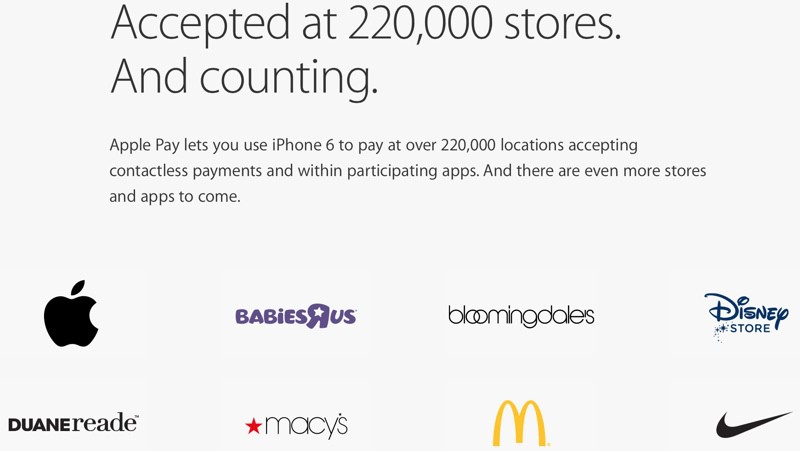 The application works for offline products with the iPhone 6 and iPhone 6 Plus where users use the NFC function of their device and Touch ID in order to make payments at around 220000 stores all around the United States at this current moment in time. However, recent reports indicate that not all shops around the United States would like to offer the Apple Pay feature to their clients for a couple of reasons which will be discussed below.

Well, there currently are many shops accepting Apple Pay, but the number available isn’t currently enough to help people drop the need of carrying a wallet with them at all times. A list of the retailers that have refused to adopt Apple Pay until now include quite a number of big names such as H&M, Coach, Bed, Bath & Beyond and many others as well.

An interesting retailer worth mentioning is KFC who have stated that they are considering introducing support for Apple Pay, but still aren’t sure when the final decision will be made.

Anyway, good news is that although there still are many retailers who have not decided whether or not they should consider offering support for Apple Pay, according to a few regulations that will be taken in this year, many of them will actually offer NFC payment support for contactless cards. The good part in this is that Apple Pay has the chance of actually being compatible with all of these NFC readers, even though a store doesn’t specify that they offer support for Apple Pay in particular.

With all of these factors in mind, it is worth remembering that there are still great online and offline retailers who offer the Apple Pay, but one incredibly large downfall of this system is the fact that it is currently only available in the U.S. Only when the system will be available in countries from all around the world will we be truly able to say that Apple has changed mobile payments forever as advertised before. What do you personally think about Apple Pay?