Lately, there was a lot of buzz around Microsoft, as the software giant released their first operating system under the new CEO, Mr. Satya Nadella, while the HoloLens holographic glasses made everybody forget about Google Glass instantly. And they’re not done yet, as a pretty serious tablet seems to be in the works.

Top-notch tablet, in the works

Nokia Power User reports that a currently unnamed Microsoft tablet, a possible successor for the Lumia 2520, might be coming soon, as it was spotted in the GFXBench testing application and at a first look, it packs some impressive processing power. 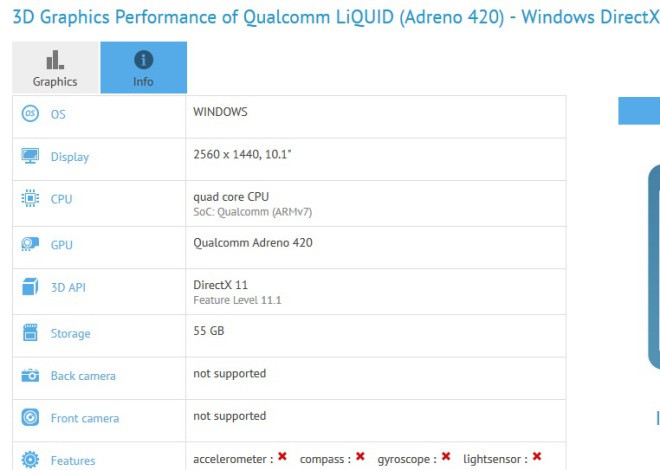 To be more specific, the Microsoft tablet has a 10.1″ display, with a QHD resolution of 2560 x 1440 pixels, while the chipset is most likely a Snapdragon 805, fact revealed by the Adreno 420 GPU. This wouldn’t be something very special, but the operating system is Windows, so there are very high chances for this to be one of the first devices to run Windows 10 out of the box.

The banchmark also reveals that this mysterious Microsoft tablet has 55 GB of storage, but actually, this is the available space, so it packs 64 gigs of internal storage, while front and back cameras are missing.

According to the above-mentioned source, Windows 10 for Phones and Tablet will support ARM-based devices with display sizes less than 8″ only, so it’s obvious that we’re dealing with the full version of Windows 10 here.

For the moment, these are the only available details about this device and we must admit that we’re already impressed by it. After all, who wouldn’t want a 10.1″ tablet running what seems to be the best operating system ever made by Microsoft? Stay tuned, as we will definitely be back with more details.

What do you think about this device? Would you buy a big Microsoft tablet with Windows 10?