Tim Cook, CEO of Apple, was given the title of “Person of the Year” by Financial Times. This was after he was nominated previously and lost to the “Ebola Fighters”, which is quite surprising considering the large amount of people who were actually selected at first and had chances to win. 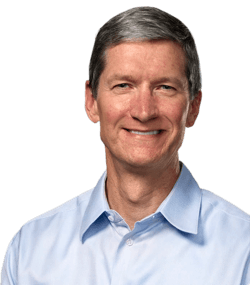 When it was announced, the Financial Times praised him for taking over the role of what had previously been that of Steve Jobs, and declared that he “held his nerve through attacks from activist investors and a loss of faith among some that Apple could succeed without its late founder.
According to the newspaper, Tim Cook’s new ideas have been very influential in enabling Apple to have such a successful year. Apart from the finances of the business and the innovative ideas, there have also been social issues to deal with, including Cook’s sexuality. The newspaper stated:

It was a rare glimpse into his closely guarded personal life that also put at risk Apple’s brand in less tolerant parts of the world. Mr Cook was driven to take a stand by his experiences growing up in Alabama, where he has talked of seeing discrimination that “literally would make me sick”.

One of the reasons why Tim Cook won this title was because he appears to be unbiased towards gender in the work place. Several women had been hired this year for roles which have previously been given to men. Cook was also credited with the success of the iPhone 6 and iPhone 6 Plus, which broke records in 2014.According to critics, Tim Cook is not as involved in certain aspects of Apple as Steve Jobs was. For example, he is less involved in the development of products, and he often does not seem as enthusiastic about new devices as Steve Jobs had been. However, many believe Cook is aware of his weaknesses, but has many strengths which balance out these shortcomings.

Based on everything that has been mentioned so far, what do you think about this? Did Tim deserve to be nominated the person of the year? Why or why not? Give us your thoughts.