Google Glass hacking is possible, and it is already making lot of rounds around the community from days. Google Glass rooting started with Saurik’s public tweet claiming that he successfully landed its bot on Google Glass core, and jailbroke the whole system to get root access. While Google Glass rooting is available from many days, no one expected that someone will come up with an interesting tweak / hack that will allow iPhone users to easily broadcast the push notifications to their Google Glass directly. 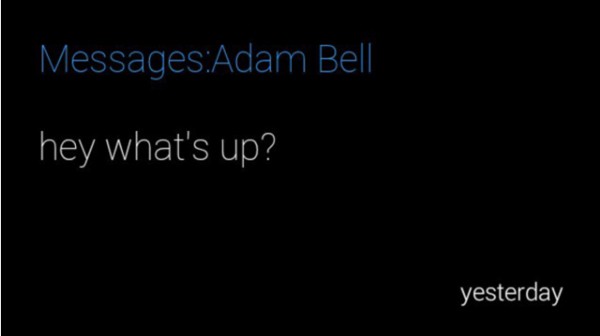 Well-known developer Adam Bell breaks the silence over Google Glass hacking community, and introduced his all new Google Glass hack that allow users to get iOS push notifications on Google Glass. The Glass by itself is not capable to communicate with any Apple device, but Adam’s hard-work forced the device to open its door for iOS push notification system. Bell is a well-known Cydia developer with a good grip on both iOS and Android. The Google Glass tweak is in work, and it is not available for public testing but he has approached the community with demo of what he is doing with his Google Glass and Jailbroken iPhone / iPad devices.

Bell has approached the community with a demo video, explaining his work for both iOS and Google Glass users. As we have learned the tweak will be only offered to iOS jailbreak users due to iOS limitations. He has already shared the official GithHub page of the project, and asked everyone to come up with their own things using his mechanism to connect both Google Glass and iPhone device.

The iOS notifications on Google Glass worked flawlessly, and even allowed Glass users to swipe and clear the notification on iOS device using Glass touch pad to perform certain tasks. The tweak will reach Cydia anytime in a shape of an app or a tweak for iOS users.