You are here: GeekSays Technology News » Android » The YotaPhone 2 finally makes it to the U.S.!

On a market filled by smartphone with basically the same features, a manufacturer from Russia managed to come with something that made everybody say “wow” after seeing it. We’re talking about the YotaPhone 2, a handset with two displays.

What’s that on the back?

Yes, in case you aren’t familiar with this awesome phone, it features a secondary e-ink screen, on the back, being just perfect from those moments when you’re low on battery and you need your phone more than anything.

The e-ink display is integrated in the YotaPhone 2 and it works as a secondary display, being able to mirror the main 5″ AMOLED one, so you can basically use any Android app on it. 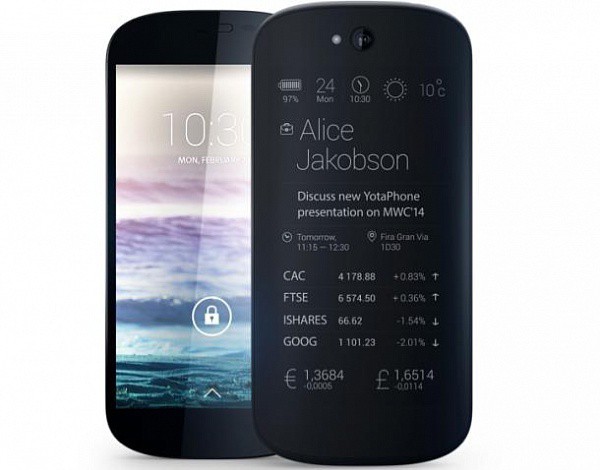 Still, as great as this phone might be, it was available just in a few countries when it was introduced. But it seems that it’s way more popular than you can imagine, as after hitting the U.K. market, the YotaPhone 2 will be available in the United States too.

Don’t expect to find it in your carrier’s offer, as the manufacturer didn’t manage to team up with any carrier, so for the moment, it will be available just through an Indiegogo campaign, starting next week, on May 19, according to ZDNet.

It doesn’t come for cheap, but it’s worth the money

The price for the YotaPhone 2 hasn’t been announced yet, but since in the U.K. it’s available for about $680, it should feature a similar price tag in the U.S.

So, besides a dual display setup, the phone is loaded with a Snapdragon 800 chipset, with a four-core configuration, running at 2.2 GHz, alongside 2 GB of RAM. It also comes with 32 GB of internal storage, without the possibility of expanding it with a microSD card, while on the back we can find an 8 MP camera, mounted above the e-ink panel. Finally, on the front, the phone features a 2 MP selfie unit.

So, what do you think about the YotaPhone 2? Would you buy it if it were available in your country?