You are here: GeekSays Technology News » Smartwatch News » Samsung Gear » The Samsung Gear S2 could be the most beautiful smartwatch ever!

The new Moto 360 isn’t the only smartwatch we’re looking forward to seeing this fall, as another manufacturer is preparing to launch another excellent wearable, with a stunning design, as revealed by the latest leaks. We’re talking about the Samsung Gear S2, which could be the mysterious round smartwatch these guys were working at lately.

Lately, an image with the device started spreading online, revealing the new design and we must admit that it has all the chances of becoming the most beautiful smartwatch we’ve seen. After all, Samsung released some great looking phones this year, so we don’t see why they wouldn’t do the same thing with their upcoming wearables. 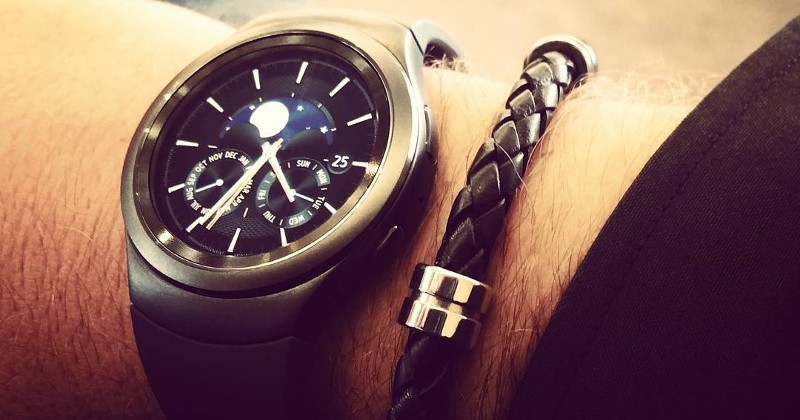 The Samsung Gear S2 image was spotted on Samsung America VP of Design Dennis Miloseski’s Instagram account, according to SlashGear. Somehow, it ruins the surprise scheduled for next week, at IFA 2015, but honestly, we’re not mad at all!

Also, the round form factor is not the only feature that makes the Samsung Gear S2 that interesting. A few months ago we were talking about a rotating bezel, which will be used for controlling the wearable. Well, this thing has it and we’re very curious to see it in action.

As for the spec sheet, the smartwatch is the first wearable to use Samsung’s Exynos 3472 processor, clocked at 1.2 GHz, alongside 768 MB of RAM. Just like its predecessor, the Gear S, it will have a 3G connection, so you will be able to use it without a smartphone.

Samsung is, once again, departing from Google as much as possible

Finally, the operating system will be Tizen, not Google’s Android Wear, but the bad part is that it limits the number of apps available for it. Hopefully, Samsung has managed to work this out somehow.

Keep an eye on our blog, as we will be back with more details about the Samsung Gear S2 as soon as it makes it official debut, at IFA 2015.