On a market dominated by Qualcomm chips, a name like MediaTek is still seen as entry-level and phone powered by their chips aren’t perceived that good. Still, these guys deserve more appreciation, as they’re making some of the best mid-range models of the moment, fact proven by the latest MediaTek Helio P10, an octa-core system-on-chip, designed to replace the popular MT6752.

That’s pretty much power for a mid-ranger

According to the folks over GSM Arena, the P stands for “premium performance”, as the chipset is using a 64-bit octa-core processor, with eight Cortex-A53 cores, four of them being clocked at 2.0 GHz, while the other four are running at a lower speed, not specified. 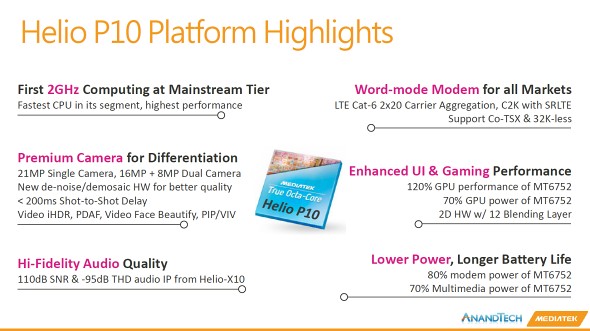 As for the graphics department, a dual-core Mali-T860 GPU is in charge of providing lush images.

Besides this, the MediaTek Helio P10 features Cat.6 LTE, enabling the users to reach download speeds of up to 300 Mbps. Compared to the MT6752’s Cat. 4, with 150 Mbps, this is definitely an improvement.

Moving on, this new mid-range chipset is able to deal with a single 21 MP camera or a 16MP/8MP dual camera setup, with phase detection autofocus. Besides improving capture quality, phones loaded with the MediaTek Helio P10 can capture full HD videos, at 60 fps or take iHDR shots.

Finally, one of the aspects we’re very interested about is battery life. Apparently, the chip will improve performance without sacrificing it, since the modem is 20% more efficient. Also, multimedia tasks will require with 30% less energy than on phones using the MT6752.

The new MediaTek Helio P10 will be available for testing in the third quarter of the year, while the mass-production is scheduled to start by the end of the year.