Tapbots has finally managed to release an update to its most popular Twitter client on iOS, Tweetbot. Tapbots has released Tweetbot 3 in App Store for iOS 7 running devices. The application is now available in the App Store, as a paid update.

No doubts, Tweetbot is one of my favorite Twitter client, and I always miss it around my other devices than OS X and iOS devices. Tweetbot 3 brings a new interface and layout for iOS 7 running device users, and allow them to install the update with paying an introductory price in the App Store. The application includes a very smooth interface, and creative menus packed with lots of stuff for end-users. However, with the passage of time, the Tweetbot application start looking outdated for many after the launch of iOS 7.

But now Tapbots has finally managed to come over the outdated layout with a brand-new interface design for iOS 7 running devices under Tweetbot 3 application release in App Store. The crew behind Tweetbot has been working hard from last couple of months, and now finally they have something to unveil in front of public. 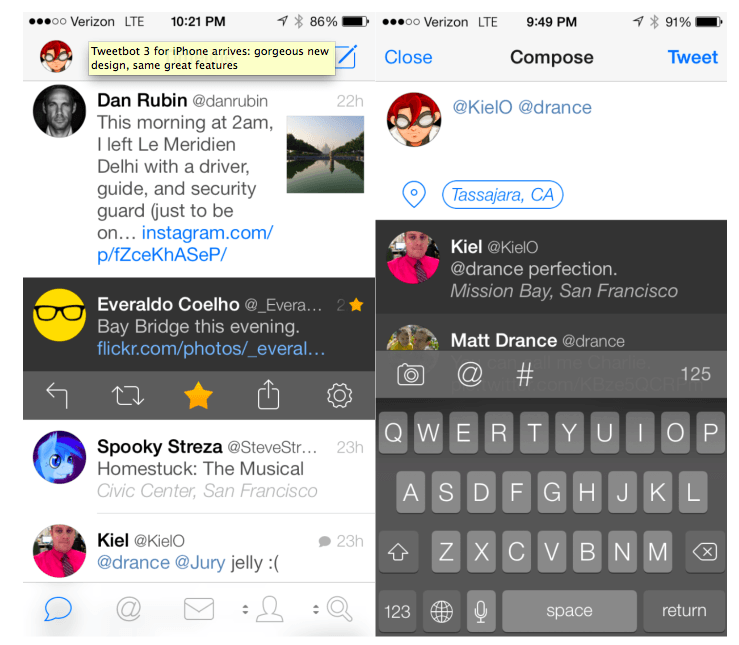 Tweetbot 3 has introduced several great features on iOS 7 running devices with a handful of new animations, and gestures. The application now brings integration of iCloud with your Twitter stuff, and furthermore. You can check out full change log here:

– Completely redesigned from the ground up for iOS7.
– Native Push Notifications.

– Mute filters lets you block messages from users without unfollowing them. Mute services, hashtags, people, and even keywords (regex included).

– Sync timeline position, direct message read statuses and mute filters between iPhone, iPad, and the Mac via iCloud or Tweetmarker.

– Customizable Navigation. The last 2 tabs are customizable and unused tabs are easily accessible.

Save drafts, add locations and POI’s, attach photos/videos, manage your lists, and much more.

Many of you must be thinking that why Tapbots decided to come up with a paid update on iOS 7. While Tweetbot is one of the very popular Twitter client on iOS. The team behind application faces trouble from Twitter in getting more tokens for users registration. Therefore, they decided to launch a standalone application with Tweetbot 3 name. You can download Tweetbot 3 from here using an iTunes Store.