You are here: GeekSays Technology News » General » Some of the worst passwords of 2014

In a world where the Internet plays an incredibly important role in our daily lives, it is important to remember that other than browsing it and being entertained, we also have to keep a close eye on security aspects, as without a clear form of security governing the Internet, the doors can be considered as left open for hackers and people with bad intentions who would like to profit, steal data and cause harm.

A ‘Worst Passwords of 2014’ chart is quite important, as it can allow people from all around the world to see which passwords they have to stay away from, while also raising awareness and hopefully making people with passwords like these to reconsider their choices, in order to strive to live in a world where the Internet can be considered more secure. 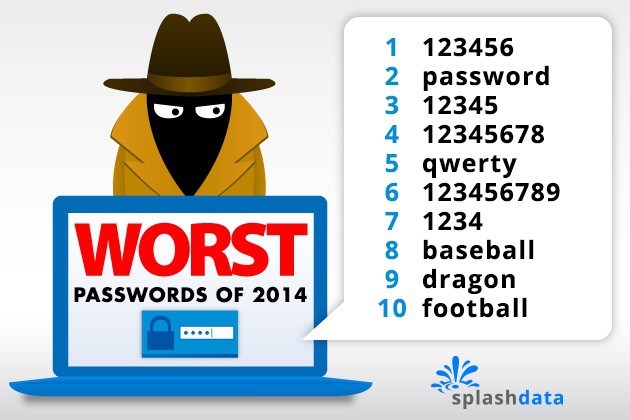 With this in mind, some of the worst passwords of 2014 include 123456, password, 12345, 12345678, qwerty, 1234, baseball, football and dragon. Another very dangerous password that people cannot stop themselves from setting up is their actual birthday date or the city or place where they live in. Research has shown that others even write the street name as password, or the name of their dog.

All of these passwords are considered hackable without much effort, as getting access to information such as your birthday date is now incredibly easy. Not to talk about passwords such as ‘Iloveyou’ or ‘123456’ which are simply too dumb to have any effect in today’s world against hackers.

By keeping everything that has been outlined so far in mind, make sure that your password isn’t any of the ones outlined above. If it happens to be, DO NOT let anyone know and simply change it right now to keep your accounts secure and make sure that you are not vulnerable on the Internet.

What do you personally think about these passwords? Have you ever had any of these set up for yourself? If you still do, don’t tell us and change it right away!