As you already aware by now, evasi0n7 jailbreak exploit is yesterday’s news now. Apple has fixed iOS 7 Jailbreak exploit in latest iOS 7.1 major update for iPhone and iPad users. The iOS 7.1 Jailbreak is not coming anytime soon for general public. Many people around the world are once again worried, and holding their taps on devices to avoid any issues with their already jailbroken iOS 7.0.6 running devices. 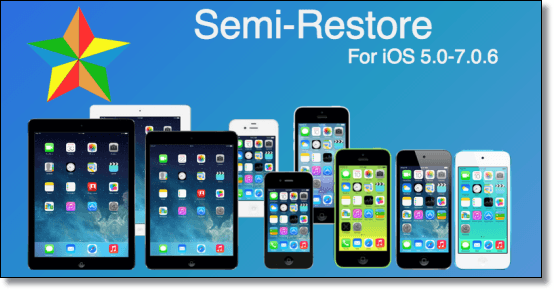 SemiRestore7 for iOS 7 is now available in the market. It allows users to easily swipe their device without losing their jailbreak support. It initially launched for iOS 6 running devices, but later developer CoolStar decided to continuously updating it as proper utility for iOS users.

SemiRestore for iOS 7 is now available to download for Windows users, and it allows iPhone, iPad users to easily restore their devices to brand new OS without losing jailbreak status.

In case if you don’t know about SemiRestore utility, it is an awesome tool that allows you clean bad / broken files from your iOS device and avoid next generation iOS 7.1 update on your device. It is very usable in case where you put your device in recovery mode; other loop due to some tweaks or changes in your system files.

SemiRestore7 for iOS 7 requires an OpenSSH on your device, so it connects to the iPhone or iPad via SSH connection and remove all the junk files to make it near stock condition. It is merit mentioning here that Mac and Linux version of the system is currently in development, but CoolStar will release an update soon to both OSes versions.

You can download SemiRestore for iOS 7 from its website. It is compatible with a huge range of iOS devices running on iOS 5.0 to iOS 7.0.6. You can use it to make your iPhone stock condition without losing iOS 7 jailbreak.