SemiRestore is gaining spot light from iPhone jailbreak community. It brings the most demanded feature for iPhone / iPad Jailbreak users. It allow users to easily restore their device to stock iOS platform without losing their jailbreak status. SemiRestore completely cleans user’s device, and help them in taking a new start with their jailbreaked iPhone / iPad device. In the past, we have covered a brief introduction of SemiRestore for our iPhone Jailbreak readers. 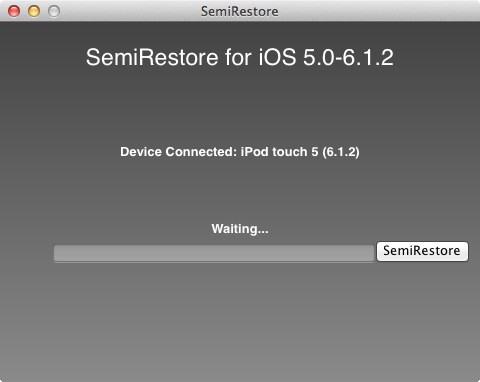 SemiRestore is an ultimate restore solution for jailbroken iOS devices, and allow iOS jailbroken users to return to almost stock level of iOS without losing their jailbreak status. Since the hackers introduced jailbreak in public, we have seen many people complaining about losing their jailbreak status in restoring their devices using iTunes. As we all know, iTunes is notorious like Apple in protecting devices from old-version of iOS system that are vulnerable to iOS Jailbreak hackers.

SemiRestore clean the device to stock levels with a simple press of button on your computer device. Back in the start of May, I covered SemiRestore for iOS jailbreak users and quickly got lot of emails and comments asking about the method to perform a restore on their device. However, after a month of silent development of SemiRestore team on the software, the folks are back in the community with a beta application of their tool for Mac OS users. SemiRestore is not announced publicly, but soon it make a debut in the public. As stated by SemiRestore official website, the application is 85% complete and only 15% left in reaching the market.

SemiRestore at the moment is pretty baked for Mac OS X system, while it requires a bit more time for Windows and Linux systems. The latest version of SemiRestore allow users to restore their iPhone and iPad devices with a single click on their desktop screen.