New screenshots have been shared by Hamza Sood, popular iOS developer, which show the Apple Watch app. The iOS 8.2 version gives viewers a better look at what the companion app will look like. The new pictures also show a menu which can be used for changing the layout of the app, adjusting the brightness, notifications settings and much more.

The setting of the Apple Watch are very much like iPhone settings. The General menus have options to allow users to change the orientation of the watch, as well as language, region and settings related to the user’s Apple ID. Users can enable wrist detection and Handoff – the popular wrist detection feature will lock the watch when it’s not in use, in an attempt to kept information safe. 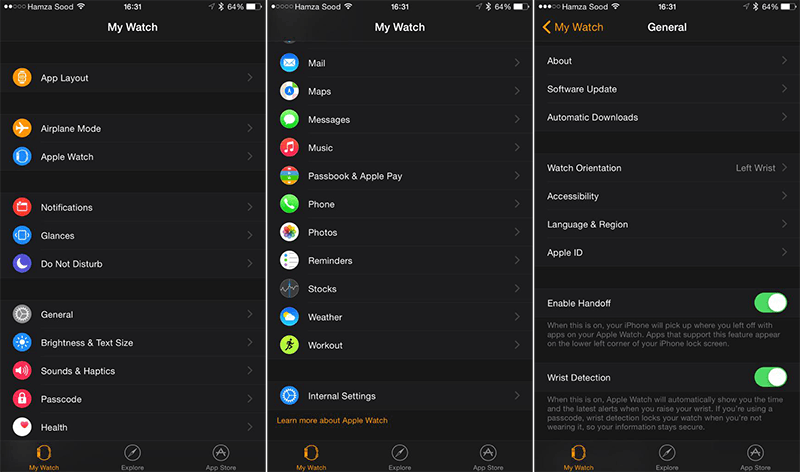 The screenshots, which have been shared with 9to5Mac by Hamza Sood, have been added to a collection which gave us the first look at this watch from Apple at the start of the year. More screenshots show the various settings for brightness, workout, contacts, maps, passcode, privacy and even more.

Available on April 24th, the Apple Watch can be pre-ordered as early as April 10th in some countries, including the USA, China, Canada, the UK and Germany. The Apple Watch Sport will start at the modest price of $349, and stainless steel versions will be more expensive, costing as much as $1,099. The most expensive watch will be the 18-carat gold edition, priced at a whopping $17,000.

Based on everything that has been outlined so far, what do you personally think about the Companion app so far? Do you think that Apple has done a good job? Let us know your thoughts in the comment section below.