You are here: GeekSays Technology News » Google » Satya Nadella steps up the battle between Google Inc. and Microsoft Corporation

It’s not unknown to us that Google and Microsoft have always been competitors of one another.

Microsoft tried to take the Google’s search leader with its Bing whereas Google attacked the two main products of Microsoft. One is Google’s Chrome and android operating systems to win the Windows market share and the other is a set of free apps which is similar to Office.

Earlier Microsoft was little slow in responding to these efforts but now things seem to be changed under the new CEO of Microsoft, Satya Nadella who quickly started responding to challenges. Aside from Bing, all the challenges thrown at the Microsoft by Google were taken instead of giving them back. Now the new CEO, Satya Nadella has changed the company’s culture. It may not bring a victory to Microsoft, but atleast the company has gone on offensive. 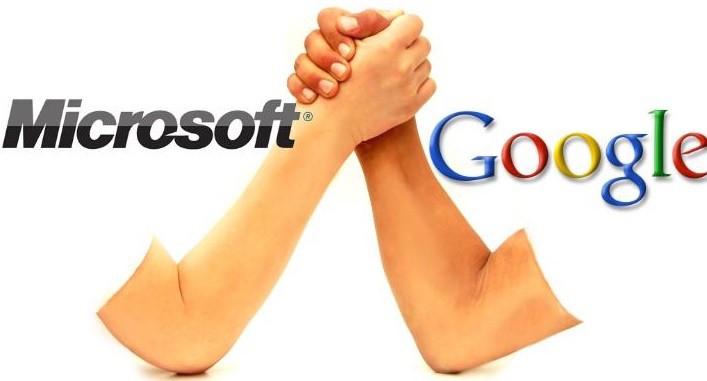 According to the NetMarketShare.com, in December, Google has won 45.9% of market share in the tablet and mobile market with the devices running android OS. Windows could not even make the list, that means the number of people using Windows tablet is very less, 0.7% , windows phone is little better with market share of 2.3%. But it’s very clear that Android wins the battle.

It’s clear to all of us that Google is winning the phone and tablet customers with its android operating system, at the same time, the company is also taking away the PC market from Microsoft with its Chromebook laptops. The number of sold Chromebook laptop devices in 2014 is 5 million units which should reach to 14 million in 2015. The number is very small to 300 million laptops and desktops sold every year, but enough for Microsoft to think about it.

CEO Satya Nadella now is giving his company a fighting chance, the devices of Apple and Google took away its customers, but now there are many products in lineup to Microsoft to compete.