You are here: GeekSays Technology News » Microsoft » Ready for more? Get ready for a Nokia Lumia 1020 sequel

Remember the Nokia Lumia 1020? Yep, that big boy from Nokia had one of the most awesome camera to ever hit the smartphone market. The 41 MP sensor made the lump on the back forgotten instantly after seeing a couple of snapshots.

Still, it’s been a while since the phone made it on the market, so normally, we should start thinking about an update. Luckily, Nokia thinks the same, so they already started sending invites to an event which will take place during IFA Berlin, on September 4. 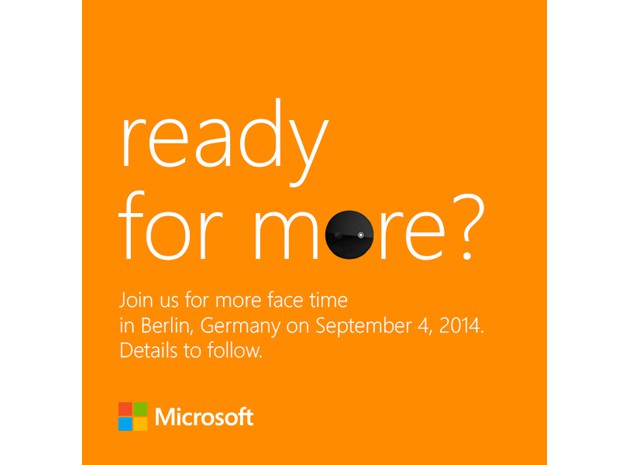 Even though it’s pretty clear that these guys are planning to launch a new smartphone, no details were given about a specific model, but let’s take a closer look to this invite.

The “O” from “more” is clearly a hint to the rear camera seen on the Nokia Lumia 1020, the above mentioned 41 MP sensor. Of course, if they bothered to send invites, it’s also clear that this device is going to rock some pretty serious specs, meaning that seeing Nokia’s new flagship is a scenario to be considered.

The date picked for the event is also interesting, as Samsung is also supposed to launch the new Galaxy Note 4 on September 3, so Nokia is probably aiming to convince people that they can make an even better device. Pretty hard guys, but let’s wait for September and see which one is the best.

Would you buy an upgraded version of the Nokia Lumia 1020?