Pinterest, the popular content discovery service that allows people to ‘Pin’ interesting contents, just pushed out a new update to its official iOS app bringing it to version 3.8.

The update brings one new major feature that you don’t want to miss out, messaging. Yes, you read it right. Pinterest now allows users to send Pins and messages to several users. You can also reply back to whoever sent you a Pin. This enables users to plan for projects or other stuffs with an entire group and share new discoveries.

“More good news: you can also send Pins and messages to multiple people. Say you’re organizing a camping trip with friends—try sending Pins to the whole gang so you can figure out where to go and what meals to make. If you need a reminder of who’s bringing what, just pull up the conversation right from your notifications. We hope this will help you plan projects, swap creative ideas and share your best discoveries with each other.” 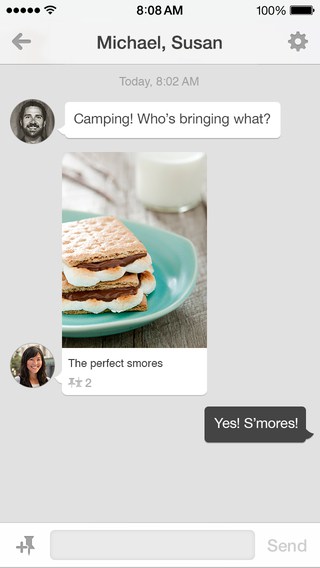 Last year, Pinterest released its ‘Send a Pin’ feature which allowed users to share interesting Pins with other users. Although it became quite a popular feature, it wasn’t useful because once a user received a Pin, they could not respond back. Personally, I would respond back to email notifications to keep on the conversation going.

So how does Pinterest’s new messaging service work? Once users select a Pin, they can add their message and choose a recipient from their contacts list and send it. When the conversation is initiated, an avatar will pop up just like Facebook’s ‘chat heads’ and tapping on it will bring up the conversation. Here’s a video demonstrating the new feature:

This is quite a nice feature introduced by Pinterest and fosters communication between groups of users, easing the planning of a project or an event. You can download the latest update for Pinterest’s official app from the iOS App Store.