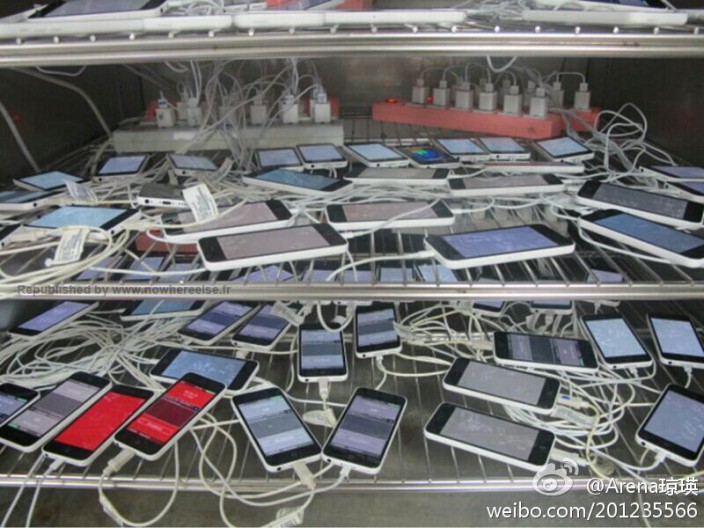 However, the image comes as a solid proof behind thousands of rumors who were suggesting the arrival of iPhone 5C finally in the market. We are still not sure whether Apple is going to name the lower-cost iPhone as “iPhone 5C” or not, but the image is giving a solid proof that a device is coming this year to bash Android phones in the market. The image shows couple of iPhone 5C devices in a rack, but it is odd for us to pick that a manufacturer does not have any better setup for testing the devices before sending out to Apple. But it is added later from big publications that it is normal testing environment for manufacturers.

The leaked image of iPhone 5C devices matches exactly with earlier leaked mockups, and leaked components of the device in the wild. An iPhone 5C device is coming in the market on September 10th. Apple is said to be hosting a media event in the upcoming month to announce next-generation series of its iPhone line.

You can follow up with older rumors here about iPhone 5C. The lower-cost iPhone 5C model will be carrying notable specifications, and mid-range price tag for the customers around the world. iPhone 5C said to be targeting the Asian users, especially Chinese customers. iPhone 5C is already flagged as a game changer for Apple in 2013 against other smartphones in the market, at least according to one analyst.