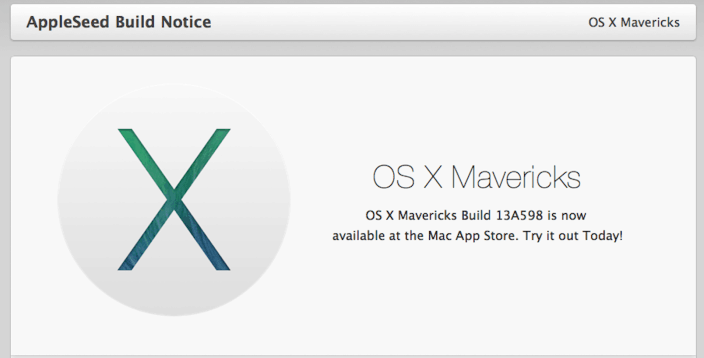 Apple has reportedly started its work on OS X 10.10, and it is codename as Syrah. The upcoming OS X 10.10 update will bring major changes to OS X environment but not likely as iOS 7. On the other hand, iOS 8 development has also rolled out to internal developers. Both OS X 10.10 and iOS 8 will see major developments in the upcoming months, but it would be limited to Apple’s internal employees.

However, OS X Mavericks GM candidate has reached the Mac App Store for AppleSeed members. Sources have claimed that the final version of OS X Mavericks will go live in Mac App Store in the last 10 days of October. In the past, we have also heard same comments from other reports that have reportedly hinted at Apple’s October event.

According to one source, Apple has made some changes in OS X Mavericks final version, which would be announced at media event later this month. There are chances that these OS X Mavericks internal GM candidate will never reach OS X developers in OS X Dev Center.

In addition to reaching a final stage of OS X Mavericks development, Apple has today launched an update of OS X 10.8.5 for new MacBook Air users.