One of the most expected phones of the last quarter of the year, OnePlus X, should make its debut this week, after the launch event was confirmed by a leaked image with a poster or invite, spotted on Chinese social network Weibo.

OnePlus’ compact smartphone, which should sport a 5″ display, making it smaller than the other two handsets from the manufacturer’s portfolio, will be launched on October 29, as stated on the poster. 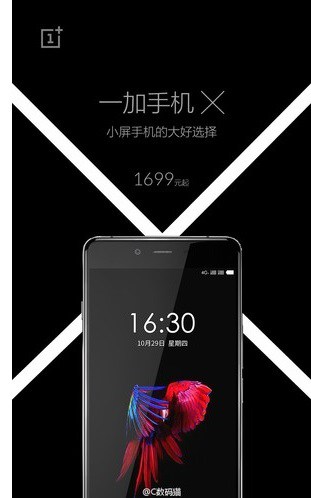 Also, there was no doubt that it will be available for a very pocket-friendly price. The OnePlus X will have a starting price of 1699 yuan, which is approximately $267. Also, if you’re lucky enough to actually attend the launch event, you will be able to get it for just 1099 yuan ($173).

Another thing that this leaked poster confirms is the design of the handset, which seems to be built around a metallic chassis, while the front (and the back, most likely) is covered by glass. Finally, the front-facing camera is also there, alongside a speaker.

Could it be just a mid-range device?

Spec-wise, the OnePlus X is expected to be powered by a Snapdragon 801 chipset, which, for most tech fans, could be a very interesting choice. Interesting in a bad way, that is, since this was the top chip of 2014 and currently, is outdated, being surpassed by models like the 810, the new 820 or even MediaTek’s Helio X10.

The chip will be aided by 3 GB of RAM, while the internal storage capacity will count 16 or 32 GB, with the possibility of expanding it, using a microSD card slot. As for the camera, department, the phone will come with a 16 MP main camera on the back, teamed up with an 8 MP snapper on the front.

Any first impressions about the OnePlus X? Would you buy this compact handset?