You are here: GeekSays Technology News » Apple » Official Announcement From Honda: Support for CarPlay for 2016 Accord

Honda on last Thursday revealed the 2016 Accord at its research facility in Mountain View. While there exists a tendency for car makers to reserve the unveilings of their new cards for big auto shows, Honda says that it chose this specific location to emphasize the role Silicon Valley will play in the industry in times to come.

The ninth-generation Accord includes a complete makeover for 2016, with a big focus on technology. All EX models (and above) will include a Display Audio infotainment system with a 7-inch touch screen display. Support for both CarPlay and Android Auto platforms will also be included, as was expected. 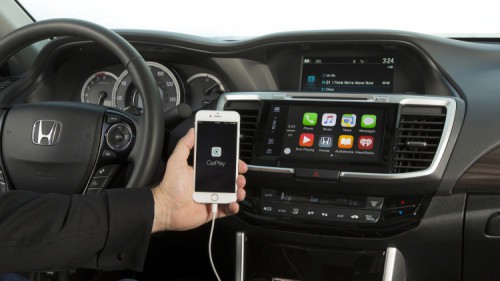 The actual quote from Honda VP John Mendel is as follows: “Customers want their vehicles to be more intelligently integrated with their smartphone-powered lives. And we are committed to delivering that experience starting with Accord, retail car buyers’ most popular vehicle the past two years.”

The 2016 Honda Accord will be pioneer in being probably one of the first high-volume support to support both Android Auto and CarPlay when it finally goes on sale in August this year. As for how much money will this titan in the world of cars cost, we are only left to guess. There’s complete silence coming from the Honda officials, but the educated guess is that it will be be similar to the current model; it starts at $23K for the sedan.

Apple released CarPlay early in 2014 as a “smarter, safer way to use your iPhone in the car.” It allows its users to use their iPhones via built-in displays in their cars, thus allowing for a much safer browsing. All the options are there: you can make calls, send messages, check maps, use different apps (Audiobooks, Podcasts, Spotify, Overcast, to name the few). CarPlay is compatible with iPhone models of iPhone and above, and with this latest announcement from Honda, the excitement is sure to run high.

Based on everything that has been outlined so far, what do you personally think about the partnership between Apple and Honda? What about their CarPlay app? Let us know your thoughts in the comment section below.