With just a few days left until the IFA 2014 begins, the leaks keep coming. If until now we found out about the plans of some of the most important players on the market, now it’s time for one that will most likely join the club too. The Nokia Lumia 830 is also set to be unveiled at Berlin, and, according to the latest leaks, it will be one amazing phone. Also, it will bring a premiere!

The pictures come from the Brazilian equivalent of the FCC and confirm that the Nokia Lumia 830 will be the first one to carry the Microsoft Mobile branding, as a step forward to complete the rebranding process, according to WP Central. 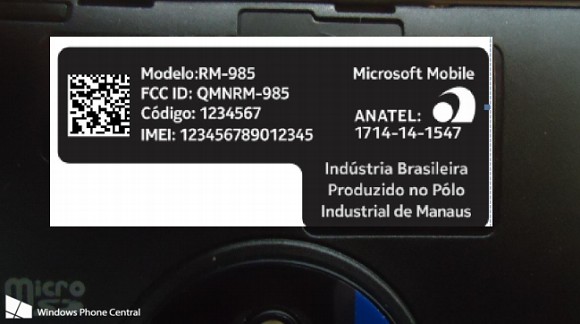 We don’t know what you guys think, but it won’t be longer until ‘Nokia’ will disappear from the front of these phones…

We don’t have many details about the specs, but it seems that we’re going to deal with a 4.7″ 720p mid-range device, featuring a Snapdragon 400 CPU, with 1 GB of RAM and 8 GB of expandable storage. Still, one of the biggest attraction points will be the 20 MP PureView camera.

Microsoft has an event set for September 4, where the Nokia Lumia 830, alongside other devices, will most likely be presented.

Anyone looking forward to seeing it?