iOS 6 Theme for iOS 7 – After the launch of iOS 7 in public, we heard thousands of criticizing comments on the user-interface changes, and how people disliked the new interface in the first few days. However, still there are many people who want to hold back on iOS 6, and avoid updating to iOS 7 just because they will lose iOS 6 styled icons, and theme pack on their devices. For those who are still in line to get iOS 6 look back on their phone, there is a theme available in Cydia that can bring iOS 6 back. 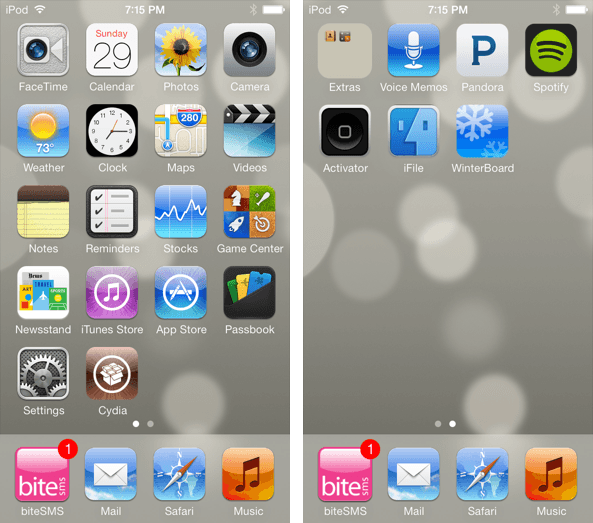 You can easily bring iOS 6 look back on your iPhone using the latest evasi0n7 jailbreak tool, and then installing updated Cydia & Mobile Substrate on your device. As Saurik has updated the Cydia Substrate with ARM64 compatibility, and full support to iOS 7 interface users can also install the same theme pack on iPhone 5s.

A new theme entitled as “iOS 6 Theme for iOS 7” is available in Cydia, and it can be easily applied using Winterboard on your iPhone or iPod Touch devices. Yeah, you need to install Winterboard. We know that many people disliked it back in regular days, but now it is compatible and more stable to work with latest devices.

How To Install iOS 6 Theme for iOS 7

iOS 6 Theme for iOS 7 is a pack of iOS 6 firmware extracted application icons, and it simply replaces the icon of your springboard with iOS 6 like. To make it work on your device, you need to first download & install Winterboard, or you can direct run a search for “iOS 6 Theme for iOS 7” in Cydia search bar.

It will automatically download the Winterboard, and ask you to reboot your device. After rebooting your device, just head over to Winterboard and apply this new iOS 6 Theme for iOS 7.