There are numerous iOS 7 features that were not described at WWDC 2013 Keynote, and requires one’s own exploring. We have already hunted few iOS 7 features on our devices, and featured here. But it appears that there are many features that are left on our devices, and we need to take another look. In iOS 7 now users can easily redeem iTunes Card using their iPhone iSight Camera. Apple has released the similar feature last year to Mac OS devices with iTunes 11 launch. 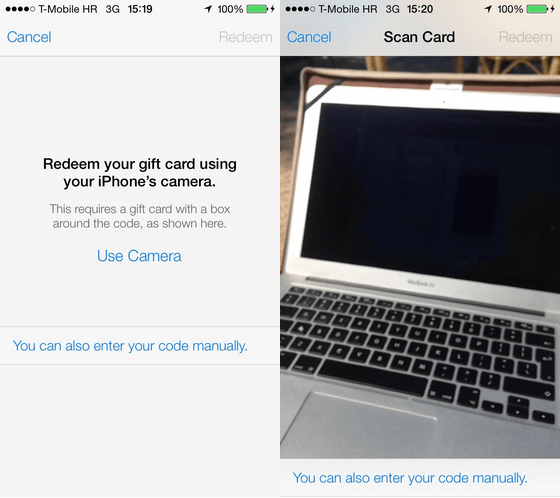 Apple has revealed that iOS 7 API’s now support barcode scanning in iOS as a standard, and developers can use it in their applications. The feature is already embedded in iOS 7 App Store. You can use iTunes App Store on your device to redeem printed iTunes Card. The feature is available in the App Store storefront app, you can hit Redeem button at the bottom of the featured section to bring barcode scanning feature.

I really liked the way Apple unifying iOS and OS X features on both machines.

It is merit mentioning here that new iOS 7 Camera API’s allow developers to scan barcodes, and perform video capturing at 60 frames per second for dramatic slow-motion scenes on the iPhone and iPad devices.