There’s no doubt that one of the best deals of the moment is the new Google Chromecast, launched a few days ago, alongside the two new stock Android phones, Nexus 5X and 6P, and the new operating system, Android 6.0 Marshmallow. For $35, you’re getting a little dongle, perfect for streaming content from your PC, Android phone or tablet directly on your TV set.

But apparently, the first generation of this little device had a problem: it was heating up. iFixIt wanted to know if the new Google Chromecast is also sharing this issue and proceeded to tearing it down. 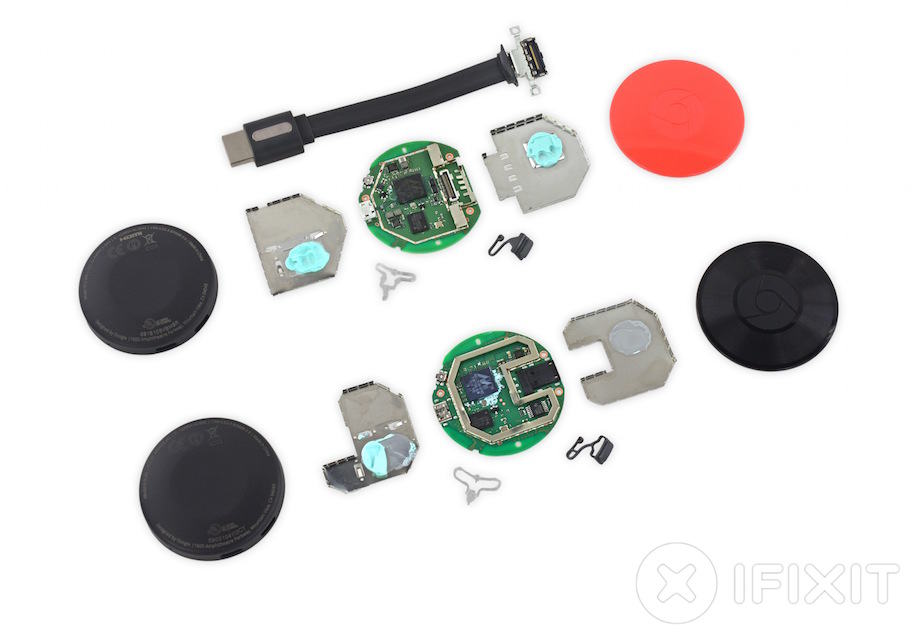 Like expected, there’s nothing spectacular hidden in the coral, lemon or black, round box, except a board with a circuit on it. Also, considering the price, nobody will try to repair it, as replacing it seems to be a better option. Still, one common issue might be caused by the flexible HDMI cable, but since it’s internally detachable, you might as well change it with a new one.

Moving on to the heating problem, iFixIt found out that Google managed to solve it by using a lot of thermal compound, great for reducing heat, so you won’t experience any issues while using it, even for longer periods of time.

A simple but amazing device, doing its job perfectly

Spec-wise, the new Google Chromecast is powered by a dual-core ARM Cortex-A7 processor, made by Marvell, 4 GB of RAM, from Samsung, and finally, 2 GB of flash memory, provided by Toshiba.

On the other side, his brother, Chromecast Audio, is not that different. It also has 2 GB of storage, the same dual-core CPU and 2 GB of RAM, from Nanya.

What are your thoughts on the new Google Chromecast? Are you planning to buy it as soon as it’s available in your country?