Snapdragon 810 is being tested

Back in April, Qualcomm announced that they’re working on a new 64-bit chipset, called Snapdragon 810. No details were given then about the availability or which phones will be the first one to use it, but, thanks to a listing from AnTuTu’s benchmark database, we can see that they’re already testing it. 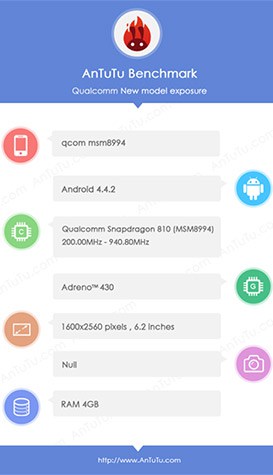 Apparently, the subject is being used on a prototype device featuring a 6.2″ display, with a resolution of 2560 x 1600 pixels, while the RAM is boosted to 4 GB. The CPU is running at a frequency between 200 and 940 MHz, even though it can operate at 2 GHz. We don’t have any information about this, so it’s very curious to see how much performance the Snapdragon 810 can give out.

As for its specs, it features four Cortex-A57 cores and four Cortex-A53 ones, resulting in a 25-55% performance increase over the previous 805 version. The GPU is also going to be updated with a brand new Adreno 430, 30% faster than the 420.

According to many sources, one of the first devices which could use the Snapdragon 810 is the upcoming Nexus 6. Still, that’s one mystic phone, which wasn’t confirmed or infirmed, but we must admit that we’d love a Nexus with this new chipset.