According to recent data published by Yahoo flurry, the usage of mobile apps in Apple’s iOS platform and Google’s android platform has been raised to 76% in 2014. This 2014 saw a steep climbing in the mobile usage compared to the previous year.

A huge percentage of this total 76% was achieved by the shopping and lifestyle apps. Apple Inc’s iOS and Google’s android together have increased the usage of shopping apps to 174% where Google’ Android has made it 220% alone. Today most of the users use their Smartphone for any kind of shopping as they are less inclined to roam around the store for less time. 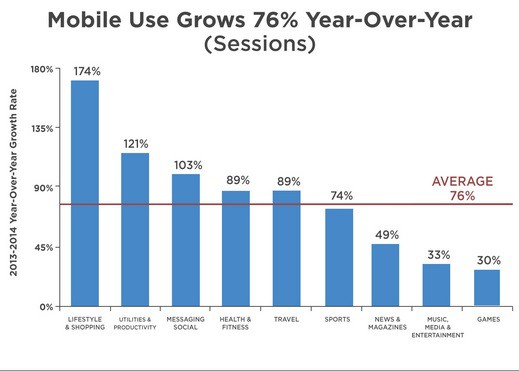 When this shopping apps usage has been increased to a great extent, the usage of game, music and fun apps has gone down from the previous year. Because people are no more using the Smartphone for entertainment purposes rather all the useful apps are used more. If compared with the previous year then the percentage of game apps usage came down to 30% in 2014 from 61% in 2013 and the usage of music, media and entertainment became 33% from 79%.

Mobile massaging app is another app to contribute to the increased percentage. Mobile messaging app has come up with lots of interesting features that help completing many work. So iOS and Android users use this messaging app in various purposes. Also Microsoft is offering the office suite to iOS and android platform which is one more reason of increasing the mobile using rate.

Utilities and productivity apps of Apple Inc’s iOS and Google Inc’s android also experienced a great change which is 121%. Yahoo flurry stated that the total session tracked in 2014 is 2.079 trillion and this was 8.5 billion on the New Year’s Eve.