We’ve all been through this: sitting in the cinema and enjoying the movie when some random person in front of you decides that he/she needs to answer a message or check Facebook. Then, a huge amount of bright light is suddenly disturbing the whole room. Pretty annoying, huh?

It seems like the guys from Microsoft hate this moments as much as we do, reason why they patented a way to make smartphones less noticeable in moments like this. 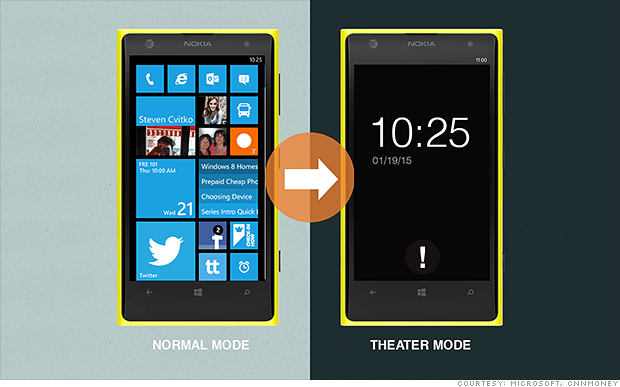 It’s called “inconspicuous mode” or simply “theater mode” and, according to money.cnn.com, it automatically puts your phone on silent and the screen’s brightness is noticeably reduced. Also, notifications don’t show up on the home screen anymore, while the time is displayed in large numbers, so you can easily check it.

No need to out your phone on “theater” manually

Still, this is nothing. The coolest part of this “theater mode” is that it will be automatic. Yes, if your phone’s GPS detects that you’re in a movie theater or in a similar place, where…well, silence is a must, your phone goes into this mode automatically. Also, it does the same thing if the light sensor detect darkness and the microphone also detects silence. Uhm, wow?!

And it gets even better. Your phone can tell if it should switch to “theater mode” by going in your calendar or mobile payments history. If you have tickets for a movie which were bought using tap-to-pay, your device knows when it needs to keep it down.

We don’t know about you guys, but we’re really impressed about this feature. If it gets popular, make sure that most brands will embrace it. I mean, who wouldn’t like to have this on his Samsung Galaxy S7 or iPhone 6S? Yeah, S7 and 6S, because it’s just a patent for the moment and the first phones with “theater mode” will be some high-end Microsoft Lumia models.

So, any thoughts about this?