If until now we were just speculating about a possible Lumia 1330, it seems that GFXBench finally confirmed the device we were waiting for.

Yet another mid-ranger from Microsoft

Nokia Power User states that the successor of the Lumia 1320, also known as RM-1063 will pack a Qualcomm Snapdragon 400 chipset, with a quad-core CPU and Adreno 305 GPU and, according to the screenshot above, 1 GB of RAM.

The storage capacity will count 32 GB, but the screenshot points that only 27 will be available. We don’t know exactly if the tested Lumia 1330 had any other apps installed or it indeed has just 27 of them user-available. As for the display, the handset will come with a pretty big one, measuring 5.7 inches and with a 720p resolution. We also need to mention the operating system, which in this case will be Windows Phone 8.1 GDR2.

If the specs are pointing to a mid-range smartphone, the Lumia 1330 is going to feature a 14 MP PureView camera, being able to record 1080p videos, while on the front, it’s going to have a 5 MP snapper, just perfect for some quality selfies and also able to record full HD videos. 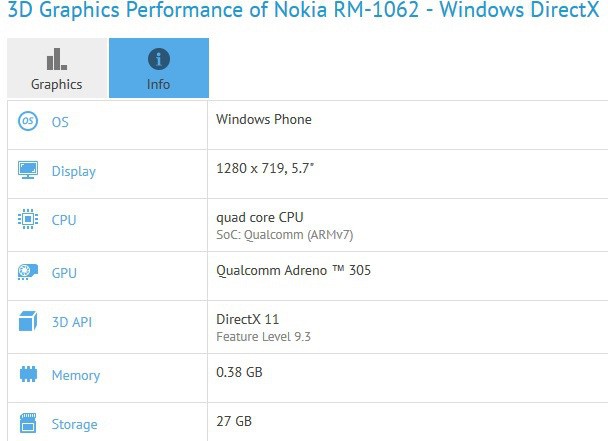 We’re expecting the Microsoft Lumia 1330 to make its debut in March, during MWC 2015, but we’ll keep you updated with anything new related to this topic.