You are here: GeekSays Technology News » Microsoft » Microsoft Corporation can give us more and the company proves that with its Lumia 535

It is not only the Apple Inc. that has released its new product on Christmas, but also Microsoft Corporation has been stealing the show with its new release Lumia 535. As this is the first phone which is not using the name Nokia, so there are a lot of buzz around it. You will see Microsoft branding on the front and rear of Lumia 535 instead of Nokia which we have seen over the years. The price is also attractive and this is the most affordable Lumia phone now.

Many of you must be thinking that is the phone good in comparison with its predecessors Nokia Lumia 530 and 520 and what is its position in the competition with Xiaomi Redmi Note? 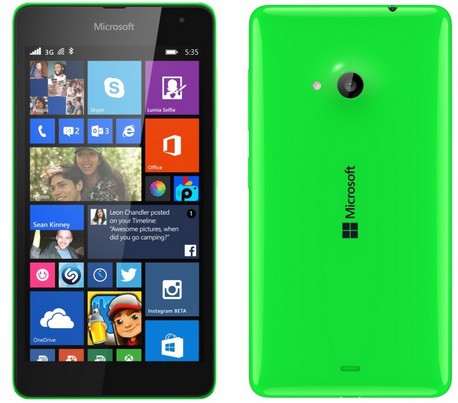 Well here is the specifications of Lumia 535, it packs 1.2 GHz Qualcomm Snapdragon processor, 5-inch IPS LCD display, internal storage of 8GB which can be expanded up to 128 GB, 1GB of RAM, 5MP rear and front camera, 1905 mAh battery and dual SIM slots.

The 5-inch display is one of the best things of the Lumia 535 mainly because the Nokia Lumia 530 has display screen size 4-inch. On the given price the display is clear and large. The viewing angles could have been better however you cannot expect everything good in an affordable price range.

When it comes about the performance, the 1.2 GHz processor may sound little less but the actual user experience is much better than that. The camera app is another thing to mention here but it works well when the artificial lights or daylight is there.

When Nokia Lumia 520 was launched on the market it was the best phone in low price but Lumia 535 is cheaper than that though in this price range there are many other good or better smartphones available on the market.

However, if you want a phone with large screen, good camera and free access to many Microsoft services, then you should go for it.