This January, the first rumors about a partnership between Nokia and Chinese manufacturer Meizu emerged, revealing that the two companies would team up in order to release a new smartphone.

Apparently, this should happen pretty soon, as the name of the device was already revealed by Chinese leaker Ubuntu Team. Meizu MX4 Supreme will be a smartphone developed by both companies and it already seems to be very interesting. 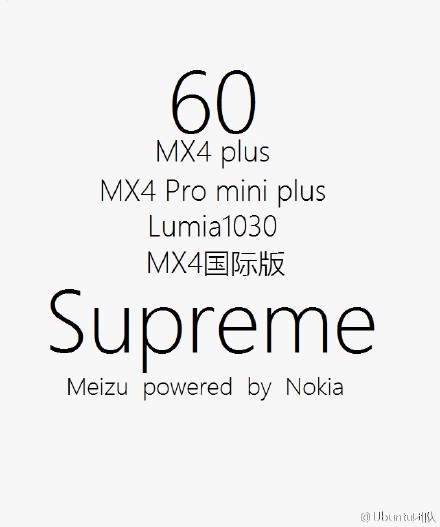 As expected, Nokia will be in charge with the hardware part, providing all the internals. Besides this, the Meizu MX4 Supreme will use Android 5.0 Lollipop, customized with the Z Launcher, which received a lot of positive feedback a few months ago, when Nokia introduced it on their N1 tablet.

On the other side, Meizu will be responsible with picking the design of the handset and the materials for the actual device. Of course, since they positioned themselves on the market as a cheap brand, we don’t expect to see a top notch design, with premium materials, like metal, for example. But we like to believe that Nokia wants to re-enter the market with an amazing smartphone, so there some chances of seeing a really good looking Meizu MX4 Supreme.

When it comes to the specs sheet, the trail is pretty cold, but Nokia could implement some of the features seen on some of their previous Lumia models. We don’t know about you guys, but seeing a Meizu with the 41 MP sensor Nokia used in the past would automatically make us give this Chinese brand more attention.

This is everything we know about this upcoming Meizu MX4 Supreme, but we will definitely be back on the topic as soon as more details will be available.

Any first thoughts? Do you think it’s a good idea for Nokia to team up with Meizu?