While Microsoft is constantly working at new phones, after ditching the Nokia brand, the Finnish manufacturer is moving a bit slower. Slower, but they’re still moving. After they released the N1 tablet, it’s time for the first Android-powered smartphone from the post-Microsoft era. Meet the Nokia C1!

GSM Arena got their hands on a first shot with the phone and at a first look, it looks a lot like an iPhone, but since we’re dealing with a pretty blurry pic, let’s not reach harsh conclusions before seeing the actual device. 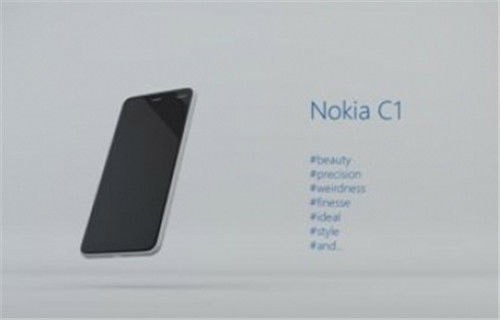 Yet another mid-range Android smartphone

Since Nokia can’t manufacture any smartphones until 2016, Foxconn will be in charge of making it, but it will still sport the Finnish branding.

In terms of specs, the Nokia C1 is expected to come with a 5″ display and a HD resolution, while a quad-core CPU, alonsgide 1 or 2 GB of RAM should power it. The internal storage capacity will count 32 GB, but we don’t know yet if it’s going to be expandable or not. Anyway, it’s enough if you ask us, so the lack of a microSD card slot won’t be such a problem.

The camera department will be represented by a 8 MP rear snapper, while the front facing unit will most likely have a 5 MP sensor. Ok, somebody at Nokia seems to be a selfie fan.

Z-Launcher, not bad at all!

Like mentioned above, the Nokia C1 will come with Android 5.0 Lollipop out of the box, but don’t expect pure Android, as it will be customized with Nokia’s Z launcher, just like their N1 tablet.

No other details, like price or launch date, are available for the moment, but we expect the Nokia C1 to make its debut in the first quarter of 2015, alongside other new models.

What do you think about the Finnish company of getting back in the game? Will Android help them?