You are here: GeekSays Technology News » Apple » MacBook Air to Have Improved Speed; Same Can’t be Said for MacBook Pro

It was though that the Broadwell processors which are used in the 13-inch Retina Macbook Pro and Macbook Air could only be as good as model from the middle of last year.

These rumours were likely to change once more data was gathered, and now it has come to light that Primate Labs’ John Poole has shared further information for all the stock version of these new devices. Performance improvements can actually be better than we thought at first, although they are still likely to disappoint. 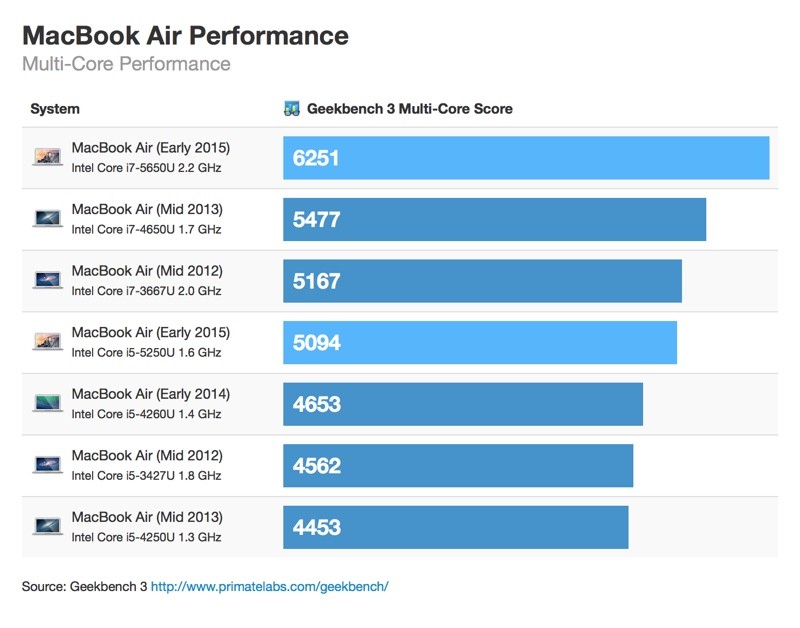 The default 1.6 GHz Core i5 chip is included on the MacBook Air, and a 2.2 GHz Core i7 is readily available as an upgrade. Both of these chips seem to perform better than those before them when it comes to the 32-bit single-core test. However, the gains were much greater when the higher-end processors took the multi-core test.

New averages suggest that single-core performance has increase by 6% from Haswell to Broadwell. The performance of the i5 chip went up by 7%, and the i7 chip by 14%.
Due to this new information, Poole suggests that those buying the MacBook Air make the most of the upgrade.

“If you’re thinking of buying the new MacBook Air I would strongly recommend the i7 processor. It has 20% faster single-core performance and 25% faster multi-core performance for only a 15% increase in price.”

13-inch MacBook Pro benchmarks revealed small improvement over previous versions, but the differences were nowhere near as great as those found on the MacBook Air.

“Tick-Tock” chip models are used by Intel, with Tock upgrades representing a microarchitecture, and Tick upgrades simply being an improvement on Tock. This generally means better efficiency, with Tick upgrades bringing better speed. The last Tock upgrade from Intel was Haswell, and the next will be Skylake, and is expected to be seen this year.

The new 13-inch Retina Macbook Pro and Macbook Air are available to purchase from the Apple Store website or Apple retail stores around the world.

Based on everything that has been outlined so far, what do you personally think about the new products that Apple has just released? Let us know your thoughts in the comment section below.