As it was reported several times before the WWDC 2013 keynote, Apple has finally introduced an update to its MacBook Air devices at the Worldwide Developer Conference in San Francisco. Apple revealed refreshed MacBook Air models on stage with a brand-new bump in hardware specifications, and an improved WiFi chip with adoption of latest standards. The MacBook Airs update comes in a relation with the launch of Intel’s next-generation Haswell-chips for next-generation computers. Intel has already launched fourth-generation processors in the market. 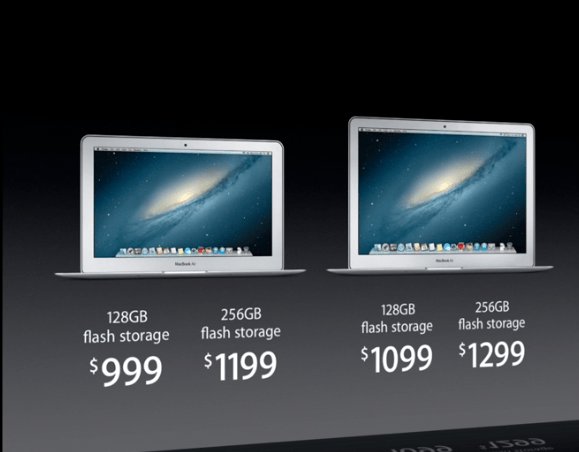 MacBook Air 2013 model is said to be the one of the very first devices of industry that will carry ultra fast, and highly optimized Haswell-chip on board. As advertised by Apple at the conference, both 11-inch and 13.3-inch MacBook Airs will receive this update. Haswell-chips allow MacBook Airs to extend their performance to a whole new level with a battery backup timing of 12 hours on 13.3-inch model, while 11-inch model will provide more than 9 hours battery backup to users with continuous media playback from iTunes services on devices.

Apple has announced the adoption of new wireless standard 802.11ac in 2013 MacBook Airs to provide faster internet connectivity to users. The all new wireless standard will allow MacBook Air machines to transfer data at 1.3 Gbps rate, which is nearly three times faster than old-generation 802.11n. Other specifications bumps of 2013 MacBook Air includes, dual microphones, a FaceTime HD camera, and a high-speed Thunderbolt port.