Last week, Pebble put a countdown timer on their website, basically telling us that a new smartwatch its on the way. The event is scheduled for tomorrow and we’re all very curious to see the new Pebble Watch, especially because most rumors are pointing to a totally redesigned phones!

But, since it’s tech were’re dealing with here, a leaked image from the company’s servers ruins the surprise, revealing how the new smartwatch will look. 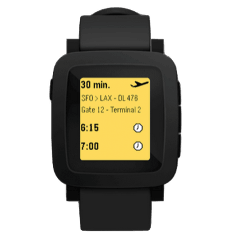 We were expecting to see a wider display and, most important, a colorful new display, while overall, the new Pebble Watch should feature a thinner design. As you can see, the leak, confirms the colorful display, but there’s no sign of a wider display. On the contrary, the bezel seems larger, while the side buttons are smaller, according to Phone Arena.

Our advice is to not take this image for granted, as the device could be an early prototype and not the new Pebble Watch, but we’ll have to wait until tomorrow to see if we’re right.

Spec-wise, it should be powered by a Cortex M4 processor and feature a 6-axis gyroscope. Also, the battery life will be improved, even though this wasn’t necessarily a problem of the previous Pebble Watch models, but we don’t mind at all.

A better OS? Why not…

Of course, the smartwatch is expected to introduce a new OS, with improved animations and a notifications timeline, as stated by the above mentioned source, developed by the webOS team.

For the moment, these are all the new details we know about the Pebble Watch, but keep an eye on our blog, as we will be back on this topic as soon as the official launch event is consumed.

What do you think about this new design? If it were to look like this, would you buy it?