Just a day ago, when I have updated all of you that iOS 7 Untethered Jailbreak bootrom exploit is not discovered, and it is nearly impossible for everyone in the jailbreaking community to grab A5+ iOS devices bootrom exploits. All thanks to Apple’s advanced processor architecture. However, it doesn’t means that iOS 7 Untethered Jailbreak is not under development. Jailbreak iOS 7 is one of the biggest mission hackers got these days, they are now fully aware of the public demand. It is said that many hackers are now working over the nights to grab dumps of iOS 7 to exploit the new iOS 7 Jailbreak. 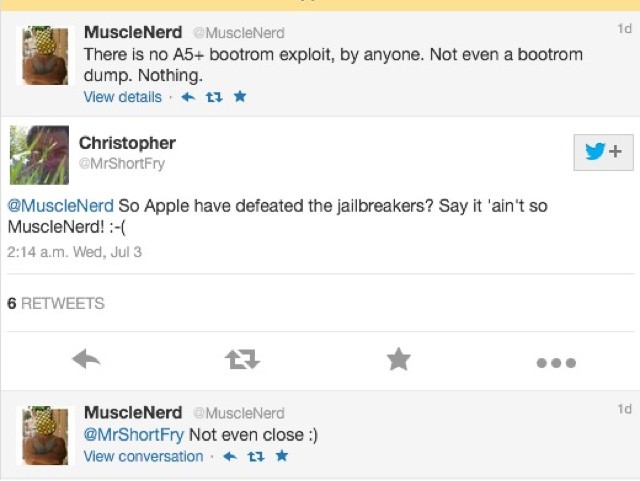 Furthermore, Jailbreak iOS 7 is becomes a biggest challenge for iOS Hackers because Apple has openly closed several iOS exploits in the latest iOS 7. Even hackers has decided to not release the iOS 7 Beta Jailbreak in public which raises lots of questions round the community. But I am glad to inform you that iOS 7 Jailbreak is currently in development process and it will surely take lot of time. You have to deal iOS 7 with patience. There is no need to assume that iOS 7 Jailbreak is dead for always, and it will not any soon. The hackers behind the successful hacking community are working, and their words truly shows their hard-work.

It is not new for us to hear that some people claims iOS Jailbreak is dead and Apple has killed it. But to those, we and MuscleNerd have some words. The prominent iOS Dev Team hacker, and main member of Evad3r’s has claimed that Apple is not even close to kill the iOS Jailbreaking community. They are just working privately, and keeping the iOS 7 beta away from everyone in the public to avoid clutter from non-expert users.